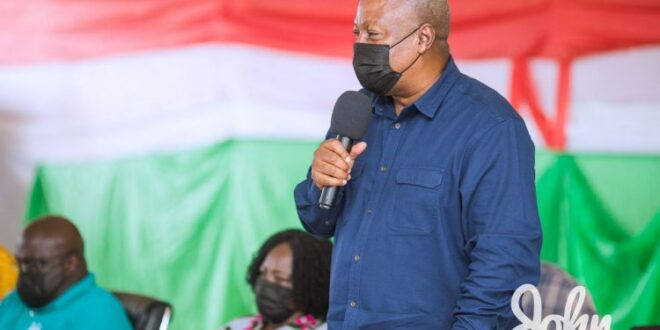 He said “Ghana is currently experiencing the highest level of unemployment recorded in the fourth republic, at an estimated 14 percent” but failed to give the source of his data.

Speaking at the launch of the TEIN APP at the University of Professional Studies, Accra (UPSA) in Accra on Monday, March 21, 2022, the former flagbearer of the opposition National Democratic Congress said: “This [Akufo-Addo] government’s response has been the adoption of short-sighted, populist, ad-hoc and poorly conceived programs that have done more harm than good. Even those enrolled in the knee-jerk NABCo program have found themselves at home after three years and remain unpaid for several months. I hear that even national service personnel, for the first time, are owed several months’ allowances.”

Mr. Mahama at the APP launch also took on the government over the worsening economic conditions in Ghana, saying the governing party has plunged the country into “Great economic and social distress”.

“The Akufo-Addo-led government that came to power on the back of mouth-watering promises to make life easier for Ghanaians and ensure rapid development of our country has so badly mismanaged the economy that we have been plunged into the most debilitating economic crisis in about four decades. Indeed, we all recollect all those mouth-watering promises, including one by the current president to transform this country within 18 months. This crisis into which he has led us has brought hardship and suffering for our people on a scale that we have never witnessed in the last 30 years of our fourth republic.”