The writ of summons dated 14th July, 2021, on a letterhead which read thus:

“IN THE ARBITRATION COURT OF TOGBI ADZIMA BEFORE TRORNUA ASHIPODI GAGLI XXIII OF KLIKOR APEGAME”, located in the Ketu South Municipality of the Volta Region of the Republic of Ghana.

The statement of claims was detailed with an instruction to the defendants to appear before the shrine to explain themselves and be subjected to attestation before Togbi Adzima cult, if their explanation fails the test of truth.

According to their petition, they have summoned Hunor Kwabla Alordzi before a legally instituted traditional Arbitration Court of Togbi Awadada Esru IV, (the warlord traditional Chief of Weta) in the Ketu North Municipality of the Volta Region, to mediate in allegations of incest allegedly committed by Kwabla Alordzi against his daughter-in-law.

They alleged that this action of Kwabla Alordzi was in defiance of their traditional taboo and their daughter began to suffer from alleged mental disorder.

They further claimed that their daughter was taken through Etua Hospitals in Aprede – Kwamatsen and Mampong Pharmaceutical Research Hospital for treatment but the diagnosis was negative.

The family therefore resolved to consult traditional medical practitioners at Wheta, where a sorcerer by the name Amuzu Numana was consulted and their daughter became normal and later confessed the incest activity between her and the father-in-law.

The alleged victim’s family summoned Hunor Alordzi before Togbi Awadada Esru’s traditional arbitration court to explain the allegations levelled against him by his daughter-in-law.

During the traditional arbitration at the palace of the chiefs, the traditional processes and procedures of consultation of Oracle’s proved that Hunor Kwabla Alordzi allegedly committed the act of incest against his daughter-in-law.

The Chiefs called on him to recline to consultation with his family to enable the traditional process of “reconciliation to pardon an adulterous woman”, a customary ritual dubbed “Aforfofo”, which is the basic solution to finally heal his daughter-in-law.

According to Awadada Togbi Esru IV when interviewed on Fafaa FM, Korbla Alordzie requested to be taken through his belief system of traditional sorcery and he came to the court with his personal sorcery consultant when the divination proved that he had committed the act of incest against his daughter-in-law.

Togbi Esru IV, says he was surprised that Hunor Korbla Alordzie went behind to Klikor to seek for fetish cults summons which has no constitutional backing.

He further alleged that he sent messengers to announce to the fetish shrine of Klikor that this matter is pending in his legally constituted traditional court, but the fetish cult of Klikor refused to allow him to continue his process.

Instead, they’ve issued another reminder letter dated 27th July, 2021, which contains an ultimatum with a threat to allow complainant open doors of voodoo attack if the defendants fail to appear before the cult. 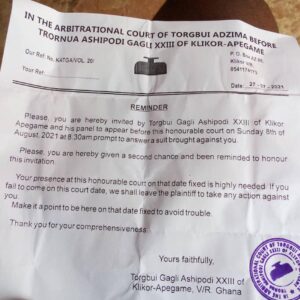 The Duamenefa Foundation of Fafaa FM, during its investigation called on the fetish shrine of Togbi Adzima Vodoo and interviewed the secretary in person of Mr. Seddoh, who confirmed that the summons was issued by their fetish cult, but could not explain the constitutional mandate of fetish shrines in matters of customary traditional arbitration.

The Duamenefa Foundation of Fafaa 100.3 FM, interviewed the District Director of the National Commission for Civic Education, Akatsi South, Rev. Vincent Adzika, who says the 1992 constitution empower chiefs in matters of traditional arbitration, but fetish priest has no locus to issue writ of summons.

Rev. Vincent Adzika advice the parties to refer the issues of incest to the police for further investigation and possible prosecution in a court of competent jurisdiction.

A renowned legal luminary, Togbi Yaka the “Awafiamega” or the warlord of Afife, who double as the National Chairman of the Traditional Medical Practitioners Council of Ghana, when called upon also advice all fetish priest to put a stop to issuing writ of traditional judicial summons with such threats to members of the public. 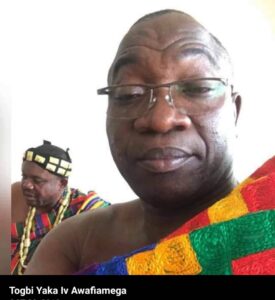 Watch out for further development….