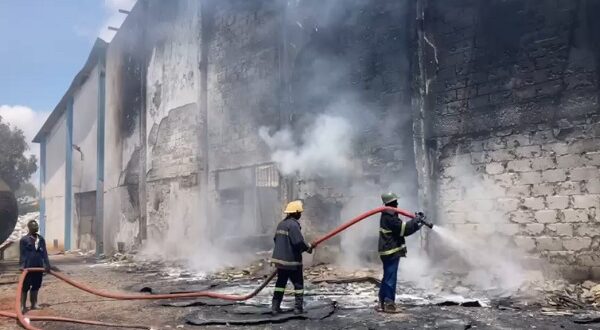 An explosion has occurred at the tank factory located in the same enclave with the Kumasi Shoe Factory at Atonsu-Agogo in the Ashanti region.

A gas tanker discharging fuel at the company reportedly caught fire resulting in the explosion.

The area has been cordoned off by Police as firefighters battle the flames.

Eyewitnesses say the tanker was discharging gas into the company’s cylinder when it caught fire at 11 am today.

The explosion reportedly caused a panic resulting in injuries to some workers of the factory who rushed out for cover.

It left residents with fear but no casualties recorded.

The driver of the tanker, Kwame Abugri said he was offloading liquified petroleum gas but in the process the tanker caught fire and later exploded.

All those present at the time, including workers, the tanker driver and his mate, and people who do business with the company by providing them with bales of used sachet water for the manufacturing of the plastic tanks were all able to escape from the inferno.