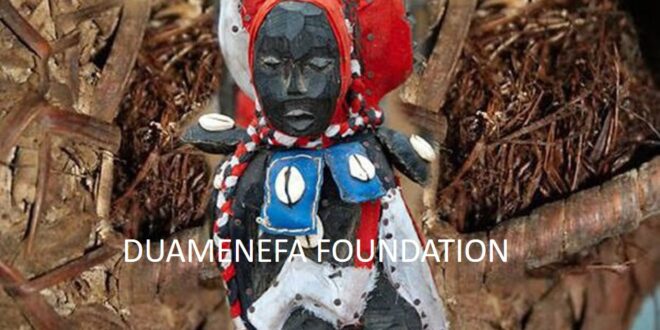 EXORCISM OF VOODOO SPIRITS AND GHOSTS AT WOE BAWE

An argument between Hon. Emmanuel Gemadzi, the Assemblyman of Woe Gbawe electoral area in the Anloga District of the Volta Region of the Republic of Ghana and Mr. Besah Bini, his uncle of same blood lineage over family issues resulted in the invocation of the wrath of voodoo spirits and family ghosts.

Besah Bini allegedly invoked the ghosts of the following deceased family members; Amevuvor, Fafa, Nani Kpeli, in addition he also invoked Vodu Anyigbator and other voodoos to avenge the insults rained on him by the Assemblyman.

According to Gershon Bini, a family member who claimed he was an eyewitness to the entire confusion between the two family members, a few days after the invocation of the wrath of the spirits, Mr. Bini Yaovi Ogho John, died mysteriously, thereafter their aunty Madam Mansah Bini also fell sick and became bedridden.

Members of the Bini family became traumatized and unable to sleep during the night. Gershon claimed that the spirits are always on rampage, that he personally saw the image of the spirits of the dead persons mentioned above hovering and walking around the house in the middle of the night. The spirits would make strange and mysterious noises.

The Duamenefa Foundation of Fafaa FM intervened into the aforementioned allegations through investigation, interrogation and broadcast.

The Foundation called on the traditional ruler Togbi Adoblanui II to summon the parties for traditional arbitration and reconciliation.

The arbitration and reconciliation were successful: Togbi Adoblanui authorized the exorcism of the spirits.   A collective team of traditional deity practitioners were contracted by Togbi for the exercise.

The Bini family is now breathing an air of relief. The family members could sleep without interference from the spirits of the dead.

Gershon Bini, later expressed his profound gratitude on behalf of the Bini family to the Duamenefa Foundation of Fafaa 100.3 FM, Dzodze for the timely intervention.

He described the Foundation as ” God sent ” and divinely inspired.

The Duamenefa Foundation of Fafaa FM is a Non-Profit Organization vested with the mandate to collaborate with relevant lawful agencies to investigate and intervene to save the vulnerable whose fundamental human rights are being trampled upon through outmoded Christian and Traditional Religious practices and beliefs.

The Foundation has over 27,437 registered and certified volunteers (still counting), Its volunteers are scattered across various districts and communities of the Volta Region with the mandate to promote peaceful coexistence.

This intervention brought to book 430 families saved by the Duamenefa Foundation of Fafaa FM from hitherto antagonistic spiritual and diabolical conflicts over the period 12 years.