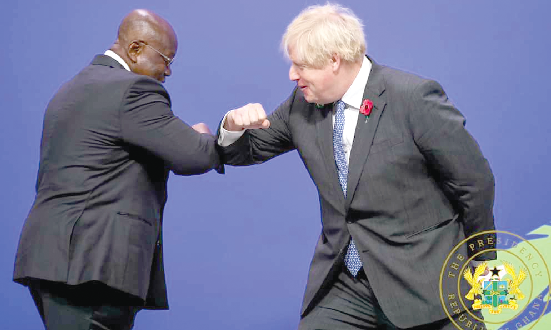 Wealthy nations have been asked to honour their commitment to make available $100 billion annually to assist poorer countries fight against climate change.

“We are, naturally, very disappointed by the failure of the wealthy nations to honour their commitment of making available $100 billion annually to poorer countries to assist us in the fight against climate change and by the unavailability of technology transfer that will help us find sustainable ways of charting a path out of this existential crisis,” he said.

The pledge by rich countries to make available $100 billion annually to help poorer nations battle climate change was made at the 2009 Copenhagen Climate Summit.

President Akufo-Addo, who spoke at the two-day summit of world leaders as part of the COP 26, said it was naturally disappointing that wealthy nations which were responsible for the biggest chunk of carbon emissions had failed to honour their commitment to mitigate climate change in poorer countries.

“Even today, the Western world is responsible for 76 per cent of carbon emissions,” he added.

The President said even though Africa contributed less than four per cent of the global volume of carbon emissions, it suffered the worst repercussions of global warming.

Making reference to the African Development Bank’s revelation that the continent would need some $3 trillion “in mitigation and adaptation by 2030” to implement nationally determined contributions, he said: “The obvious question arises as to how we, in Africa, finance these commitments, especially as our socio-economic development continues, unfortunately, to be low.”

“The Almighty has blessed our lands with abundant natural resources, and it will be wholly unfair for the world to demand that Africa abandon the exploitation of these same resources needed to finance its development and help us cope better with the threat of climate change at a time when many countries on the continent have only just discovered them,” he said.

President Akufo-Addo said Africa’s agrarian and resource-driven economies were peculiarly susceptible to the effects of climate change, while its capacity to withstand its shocks was weak.

While stressing that climate change was the greatest threat to the realisation of the Sustainable Development Goals (SDGs), he said it had enormous impact on the fundamentals required for survival on earth.

He indicated that agriculture, water, energy and the extraction of mineral resources were essential drivers of development in African countries but, at the same time, they were characteristically sensitive to changing climate.

President Akufo-Addo said the development and industrialisation of the wealthy nations of today were also hinged on the exploitation of the natural resources of poorer nations, a development that came at the expense of pollution and the emission of greenhouse gases.

“Those same nations are, however, insisting that we abandon the opportunity for the rapid development of our economies. That will be tantamount to enshrining inequality of the highest order, a totally unacceptable conclusion,” he said.

The President said the solution to the threat of climate change must be equitable and fair grounds, “a solution that levels the playing field; a solution that recognises the historical imbalances between the high emitters and low emitters”.

“Ghana, therefore, supports the call for debt-for-climate swaps, which will address a multitude of issues in one fell swoop,” he added.