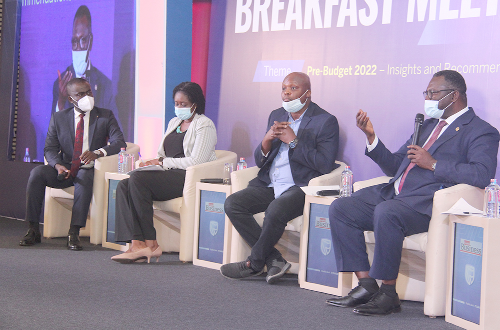 A Tax Consultant and Lecturer at the School of Law, University of Ghana, Dr. Abdallah Ali-Nakyea, has asked the government to use the 2022 budget to chart a clear path towards the passage of the Tax Exemptions Bill.

The bill, when passed is expected to streamline the tax exemptions regime in the country.

In the face of low revenue mobilisation and considering the huge amount of revenue the government loses through tax exemptions annually, the Tax Consultant said it was unfortunate that the bill, which was first introduced in 2019, has still not seen the light of day.

Speaking at the Graphic Business/Stanbic Bank Breakfast Meeting in Accra yesterday, Dr. Ali-Nakyea said the government should rather focus on plugging some of those revenue leakages rather than consider new taxes in a bid to increase its revenues.

The meeting was held on the theme: “Pre-Budget 2022; Insight and Recommendation”, and brought together business leaders, policy makers, people in academia and business advocacy groups.

Tax exemptions are growing at levels that have become a worry to many economic watchers in the country.

The President, also in his State of the Nation Address in 2018, described it as a bane to the country’s development.

It is estimated that for every one Ghana cedi of tax collected, the corresponding amount given away as exemptions increased from six pesewas to 12.5 pesewas between 2010 and 2018.

Subsequently, the Ministry of Finance, in the first quarter of 2019, introduced the Tax Exemptions Bill to consolidate and streamline the applicable exemptions in different laws and improve the transparency and certainty in dealing with the exemptions.

However, after more than two years, the bill has still not seen the light of day.

Dr. Ali-Nakyea noted that all the tax increases and the introduction of new taxes over the years had failed to make any significant impact, as the country’s revenue to gross domestic product (GDP) still hovered around 13 per cent, compared to its peers on the continent who were doing about 18 to 20 per cent.

He said that was an indication that the country had to be efficient and effective in the collection of taxes, rather than introducing new ones.

“One of the key areas we should look at is the tax exemptions and there has been a tax exemption bill in parliament since 2019. We are just hoping and praying in this budget, it will quickly come out with the bill which will put a check on the way exemptions are determined, how they are granted and monitored,” he stated.

He said while tax exemptions were not bad, it should always guarantee value for money.

“It is time to look at all the tax exemptions agreements. If we are not getting the benefits for which they were granted, then they will have to be reviewed or scrapped,” he said.

Also speaking at the meeting, the Minister of State in charge of Finance, Mr. Charles Adu Boahen, said the ministry was looking at laying the new Tax Exemption Bill before Parliament even before the presentation of the 2022 budget.

He admitted that the bill, which was first considered in 2017, had taken too long in becoming a reality.

“We have been talking about this Exemptions Bill from 2017 and we just submitted a draft to Cabinet. The plan is to try and get it laid before parliament before we submit the budget.

“We are having a meeting tomorrow to finalise that and get it laid. The objective is not to enter 2022 without the Exemption Bill laid before Parliament,” he noted.

Mr. Adu Boahen said the government would continue to look at ways to increase the country’s revenues without necessarily increasing the burden on the average Ghanaian.

He, however, bemoaned the fact that Ghanaians were certainly not paying their fair share when it came to taxes.

“We have under two million people who pay personal income tax. If you juxtapose this against the total population and the number of mobile money subscribers, you will realise we are not doing enough.

“We have a total population of 30 million people, with about 17 million on mobile money, which means they are somehow economically active, but only under 2 million pay income tax,” he pointed out.

A Senior Lecturer, Department of Economics at the University of Ghana, Dr. Priscilla Twumasi Baffour, for her part, also emphasised the need to increase the country’s revenue base.

She said the government must leverage its digitisation drive to rope the informal sector into the tax net.

While putting in place efforts to increase revenue, she said it was also critical to consider at expenditure rationalisation.

“The problem of economics is meeting unlimited wants with limited resources and for that matter we need to prioritise, plan and get value for money,” she stated.