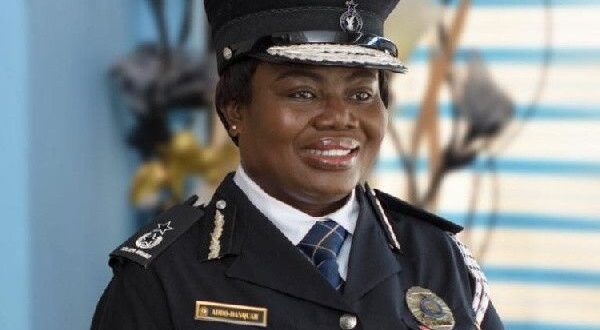 Commissioner of Police (COP) Maame Yaa Tiwaa Addo-Danquah, Director-General, Police Professional and Standards Bureau (PPSB) of the Service has been released to the Presidency for a new appointment.

GraphicOnline gathers that COP Addo-Danquah has been released to the Presidency, specifically, Chief of Staff, Office of the President for re-assignment.

The Police Service in a letter dated December 13, 2021, and signed by COP Christian Tetteh Yohuno, Director General, Administration said: “I am directed by the Inspector General of Police to release you from your current schedule and report to the Chief of Staff at the Presidency to be re-assigned”.

“Your release takes immediate effect and wish you the best in the new position that you will be assigned.

“Please accept the compliments of the Inspector General of Police,” the letter stated.

COP Addo-Danquah is currently the Director-General, Intelligence of the Ghana Police Service.

She is the first female Commandant of the Ghana Police Command and Staff College (GPCSC) located in Winneba, the Central Region of Ghana to be precise.

She got recruited into the Ghana Police Service in 1990 and is married to Mr Ofosu Addo-Danquah, with three children.

Mrs Maame Yaa Tiwaa Addo-Danquah was recruited into the Ghana Police Service on July 27, 1990, and has risen through the ranks by dint of hard work and her desire to achieve higher academic laurels.

When she passed out, she was first posted to the Police Hospital Accounts Section as a constable.

After the 18 months probation, she was promoted to the rank of a Sergeant in 1992 because she enlisted with a Diploma in Business Studies Accounting Option which she obtained at the Kumasi Polytechnic between 1988 and 1990.

Having been promoted to Sergeant, she enrolled with the Institute of Chartered Accountants, Ghana in 1995 and passed the Level Two examinations successfully and was promoted to Chief Inspector. This granted her a direct entry to the Police College in October 1998.

In May 1999, out of a class of 48 (46 men and two women), she was adjudged the All Round Best Cadet and the Best Student in Humanities making her the second female to take that award at that time.

In recognition of her remarkable accomplishment, a special staff of honour was ordered from the United Kingdom (UK) by the then Inspector General of Police (IGP) which was presented to her by the late Professor Evans Atta Mills who was then the Vice President.

Along the line, she was made the administrator at the Police Hospital when the person in charge went on a Peace Keeping Mission. Later, she also had the opportunity to go on a Peace Mission in Kosovo where she acted as the Logistics and Finance Officer for Missing Persons Unit.

With her international peacekeeping operations experience in Kosovo under her staff belt, she was posted to the Police Headquarters Finance section.

She was granted a three-year study leave to pursue a programme in the UK with the Association of Chartered Certified Accountants (ACCA).

COP Yaa Tiwaa, who by this time had demonstrated a knack for excellence in the academic area, ‘conquered’ all her papers before the stipulated time and qualified as a Chartered Accountant in 2006.

Her ACCA qualifications certified her to practice as an accountant in several jurisdictions including the United Kingdom and Ghana.

Upon her return, she was attached to the Controller and Accountant General’s Department to learn first-hand information on Public Sector Accounting. Therefore, after 10 months, she was assigned to head the Commercial Crime Unit (CCRU) of the Criminal Investigative Department (CID) of the Ghana Police Sevice for three years.

Interestingly, in addition to a tall list of achievements, she is also a Certified Fraud Examiner.

Due to her pioneering abilities and her record of turning departments around to achieve enviable heights, ACP Yaa Tiwaa was made to bring the then defunct CID Training School, which was located at the Police Training Depot, back to life.

There, she succeeded in training 550 detectives to help find proof of wrongdoing or to make recommendations for rectifying financial anomalies.

On November 6, 2013, when the then IGP, Mr Mohammed Alhassan, established the Ghana Police Staff Command College (GPCSC) at Winneba, she was appointed the first female Commandant of the college.

COP Yaa Tiwaa, a second child among seven siblings, was born on August 19, 1969 at Konongo in the Asante Akyem district of the Ashanti Region.

She had her secondary education at the Bompata Secondary before enrolling at the Kumasi Polytechnic.

She is married to Mr Ofosu Addo-Danquah, a lecturer at the Department of French at the University of Cape Coast.

She has a daughter and two sons.

DCOP Yaa Tiwaa who is a die-hard Catholic worships with the St Peter’s Parish at Osu.