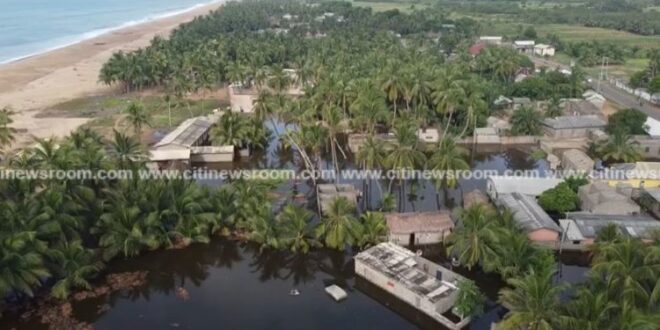 The Coastal Development Authority (CoDA), has assured residents of Salakope and Amutinu in the Ketu South Municipality of the Volta Region that they would be given loans and outboard motors to those affected by the recent tidal waves.

This, according to the Authority, is to alleviate their plight following the impact of the disaster.

Chief Executive Officer of CoDA , Jerry Ahmed Shaib, made the promise when he visited the victims on Friday.

“All the fishermen who are willing to take an outboard motor, we are ready to give them the outboard motors at a really subsidized rate. It costs between GHS 25,000, but we are giving it to them at GHS 10, 0000, and we are breaking it down with certain terms of payment.”

“So we are not going to take it upfront.  We are also going to use our CODA credit union to provide them with financial support.   That support is going to be in the form of a loan with no interest and will be paid in a period agreed by the Authority.”

Not only that, but the fishmongers will also receive free head pans.

Thousands of residents in the Anlo district, Keta, and Ketu South Municipalities have been displaced while preparations towards the Basic Education Certificate Examination by final year students in Fuveme are in limbo.

Days after the incident, affected residents are yet to receive some form of relief.

But, Mr. Ahmed Shaib also noted that the Authority is working in earnest to relocate the affected households.

“In some places, we think that the sea has consumed some buildings. We think that the best way is to relocate the people. We will look at a place where we think that it is okay to do some construction. But if we will proceed, it will be until the Hydrological Services Department has given us the green light. ”

The government has said preparations are underway to transport relief items meant for residents who were hit by the tidal waves.

Also, a  team made up of the National Disaster Management Organization (NADMO), the District Chief Executives, and Members of Parliament for the affected areas visited the place to assess the impact of the tidal waves.

Communities such as Abutiakope, Kedzikope, and Dzelukope are largely affected as homeless residents were left with nothing to salvage while residents of Anloga, Dzita, Agbledomi, Atiteti, Agokedzi, and Fuveme, were also displaced by the fierce tidal waves that swept through the communities.

The Member of Parliament for the Ketu South constituency, Dzifa Abla Gomashie, has raised alarm over what she described as a humanitarian crisis following the impact of the tidal waves and was unhappy that the Sea Defence Project had been abandoned by the governing New Patriotic Party (NPP).

The situation has so far caused most of the residents to salvage some of their belongings onto portions of the main road while they wait for the water to recede.

Tidal waves hitting communities in those areas have been an annual occurrence.