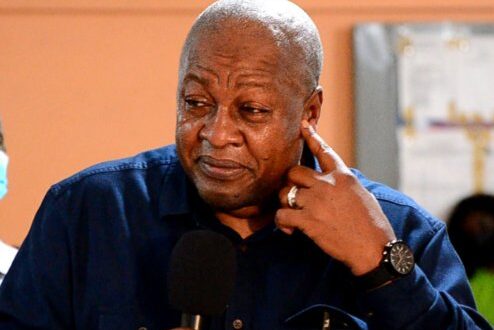 Ex President John Dramani Mahama has chastised the NPP government for closing down some radio stations in the country, ostensibly due to their inability to pay for the renewal of their licenses.

He believes that the radio stations were only closed down because the government “disliked” them – an act that he says could set a bad precedent in the country.

Addressing the Upper East Regional House of Chiefs at Bolgatanga on Tuesday as part of his “Thank You” tour of the region, Mr. Mahama said he was drawing the attention of the traditional rulers to the matter because they were the moral voice of the country.

The 2020 Presidential Candidate of the NDC said he believes the rulers could draw the attention of President Akufo-Addo to the problems that such decisions could cause for the country in the future.

He said the constitution of Ghana guaranteed the freedom and independence of the media.

However, in his opinion, the current government is not allowing the media to fully enjoy these freedoms.

“Indeed, there is a whole chapter [in the constitution] on media freedom. Unfortunately, even when you have the best constitution, you can have governments that try to bend it to be able to achieve whatever ends they have in terms of limiting our democratic rights. So today, government can say that a radio station has been late in paying its license fee and so we are shutting it down”, John Mahama said.

He added that; “When I talk about it, I talk about it because of the precedent it can set. There is a saying in Twi that ‘the stick that is used to beat Baah is the same stick that will be used to beat Dakyi’. So, the [radio] stations you don’t like, you can close them down today. When another government comes and they decide to do the same thing to the stations that they too don’t like, what kind of country will we be building?”.