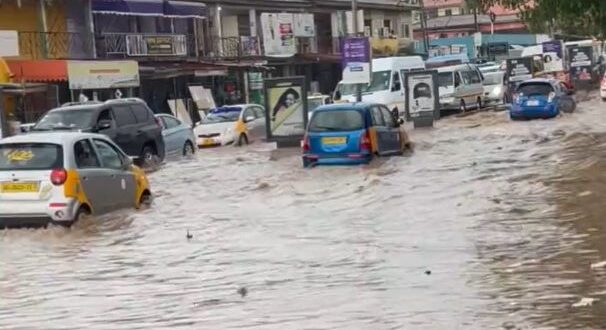 Cars submerged after few hours of downpour in Accra

A few hours of downpour has left some parts of the capital, Accra flooded.

Pictures and videos on social media showed how some vehicles struggled to drive through flood water around the Ofankor Barrier.

Commuters in Achimota, Taifa and Kaneshie also had a hard time maneuvering through the water.

The rainy season has seen many parts of Accra flooded, with several homes counting their losses after floodwaters destroyed a number of properties.

According to an Audit Service report, an amount of GH¢117,711,420.90 was invested in the construction and maintenance of drains and culverts in flood-prone areas from 2015 to 2019.

These investments have however not led to a lasting solution to perennial flooding.

Former Minister for Works and Housing, Samuel Atta-Akyea recently indicated that the government’s effort at addressing perennial flooding has been impeded by the destruction of culverts created to facilitate the easy flow of water during the rainy season.

He suggested that perennial flooding will be addressed if culprits involved in the destruction are sanctioned.