Breaking News
Home / NEWS / Attack on Radio Ada: I decided to quit this job after the beatings – Victim laments 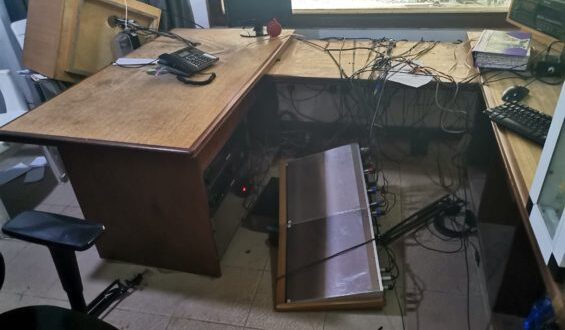 Attack on Radio Ada: I decided to quit this job after the beatings – Victim laments

Mid-morning presenter at Radio Ada, Gabriel Korley-Adjaotor, who was manhandled during the attack on Thursday, has said that he feels traumatised after the incident.

Speaking to JoyNews’ Tema Regional correspondent, Kwame Yankah, Gabriel said he decided to quit his job after he was severely beaten on Thursday.

He narrated to JoyNews that he feels a heavy load on his head due to the beatings.

According to Gabriel, he was beaten severely.

“I heard a knock on the door. Open this door! Open this door! Who is in there? And one was shouting, break the door, use your leg to break the door. Before I will sit, the door was broken and they entered. Without asking me anything, they started the beating and they beat me, dragged me from the studio to the corridor and they asked me to lie down. In fact, they gave me a beating severely. They beat me badly, that’s what happened yesterday,” he narrated to Joy News.

The victim explained that when the thugs entered the studio, he was hosting a show on marriage which had no correlation with any issue on the Ada Songor salt project.

He added that he cannot find any linkage or reason as to what had caused the thugs to besiege the premises of the radio station, assault workers and vandalise properties.

“The programme is about marriage, a segment about marriage. So it has nothing to do with Electrochem and McDan and his company. So I don’t’ figure the reason why they were here and what prompted them to come here and destroy our equipment and then beat me,” he said.

On Thursday, January 13, 2022 at 11:30 in the morning, thugs numbering about 10 attacked the premises of Radio Ada, a community radio station at Ada.

Management of Radio Ada, 93.3 FM subsequently blamed the attack on their extensive coverage of matters relating to the Songor Lagoon project.

The radio station, in a press statement that presented facts of the incident, stated that one of the hoodlums revealed to them, that they were targeted for throwing light on recent developments on the Songor Lagoon.

“The attackers openly declared that they had come to vandalise the station because of its ‘Manor Munyu’ and other programmes that discussed the recent developments in Songor. They threatened to inflict further havoc should the station continue with programmes on Songor,” the Management of the radio station stated.

Meanwhile, Electrochem Ghana Limited, the company contracted to mine salt in the Songor Lagoon, has dissociated itself from the attack on Radio Ada.

According to the Corporate Communications and Public Relations Manager of Electrochem Ghana Limited, Henking Adjase-Kodjo, the company has no hand in the incident.

“It’s news to me same as it is to you. I read it on social media a few minutes ago. Electrochem has no interest in this development. Actually, it is rather unfortunate. It is bad news to us but we have no direct or indirect link to the development,” said Henking Adjase-Kodjo.

The Member of Parliament for Ada, Comfort Doyoe Cudjoe-Ghansah in an interview on JoyNews’ Midday News urged President Akufo-Addo to put measures in place to ensure the safety of journalists in the country.

“I am calling on the President as a Human Rights Lawyer to speak up and make sure he protects our vulnerable journalists. It is bad news for Ada,” she said.