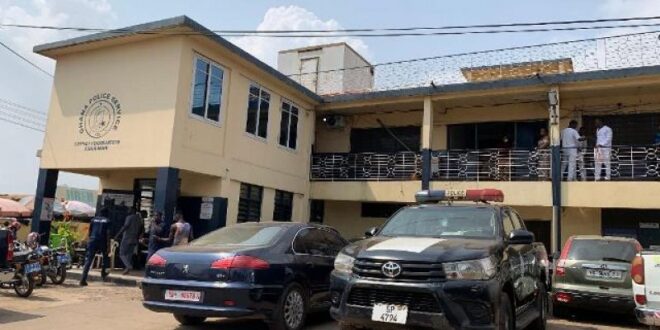 Four policemen have been interdicted after a suspect died in police cells at Ashaiman, in the Tema Police Regional Command last week.

The reason for arresting the suspect, and placing him in police cells was reportedly not recorded in the station diary.

Besides, other inmates who noticed the suspect needed medical attention at night and drew the attention of the police man on duty to it, were ignored until the suspect reportedly died the following day on Wednesday, May 4, 2022.

Those interdicted are the Station officer, two counter NCOs [non commissioned officers] and the arresting officer.

The suspect who is now deceased is Ebenezer Dosu, a 35-year-old man, Graphic Online has gathered from police sources.

He was taken to the Tema General Hospital where he was pronounced dead on arrival.

The body has since been deposited at the morgue.

Graphic Online also gathers that the police officers have been interdicted pending investigations because there is no record in the station diary or entry as to what led to the arrest of the suspect now deceased, and he was put in cells.

While in cells, other inmates drew the attention of the counter policeman to the fact that the suspect needed medical attention but the policeman did not reportedly act.

The case has since been referred to the Regional Criminal Investigations Department (CID) for investigations following which the said officers have been interdicted, including the station officer.

But the police has said he was arrested for an offence, conducive to the breach of peace.

Lance Corporal Prince Ofosuhene after arresting the suspect for the said offensive conduct, conducive to the breach of the peace took the suspect to the Ashaiman police station to be detained.

The suspect reportedly vomited while in cells and complained to the counter NCO, Sgt Eric Kumi Ansah, who reportedly ignored him and did not act even after the cell mates also drew his attention to the condition of the suspect.

Sgt Kumi reportedly did not make any entry into the station diary on when the suspect was handed over to him until about 5:15am on May 4, 2022 when he was about to end his duty.

Sgt Kumi ended his duty at 6am May 4, 2022 and handed over to Sgt Lasiru Mustapha and reportedly did not disclose the condition of the suspect to Mustapha about what had happened the previous night.

It was about 2:30pm on May 4, 2022 that the NCO, Sgt Lasiru Mustapha informed the station officer, Chief Inspector Bismark Adongo that Dosu was unconscious in the cell with “yellowish” fluid from his nose.

They therefore took him to the Tema General Hospital where he was pronounced dead.