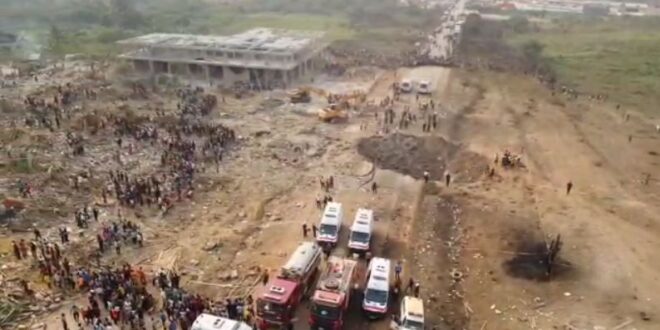 The explosives detonated when a motorcycle collided with the truck on Thursday afternoon.

He said such guidelines include; adequate Police escort and a fire tender should have accompanied the truck carrying the explosives.

“When explosives are being transported, they need to meet certain guidelines. In this case, there should have been not only a Police escort to manage the traffic, but also a security escort. Because, in all jurisdictions precautions are taken that ammonium nitrate does not fall into wrong hands for criminal purposes. The way I see the issue is that the company [Maxam Ghana Limited] did not ensure that the escort itself was adequate. I’m told there was a Police escort, how large was it? Was it in front or behind the vehicle during the transportation, am not sure?”

“There should also have been a security escort, under the circumstances whatever arrangement were put in place was not sufficient and therefore the collision with the tricycle caused the accident which then caused an ignition that then created the flame which then resulted in the explosion…there should have been a fire tender as part of the convoy that was moving the stock of ammonium nitrate to its destination. Now because there was no fire tender, there was no capacity, no means to handle the fire which then created the explosion,” he stated.

Meanwhile, Lands Minister, Samuel Abu Jinapor has said that government will not shield anyone found culpable for negligence leading to the explosion at Apeatse near Bogoso in the Western Region.

According to him, the government will ensure it punishes anyone whose negligence may have led to the accident.

“Let’s wait for the outcome of the investigation, but if like you say [regulatory failure] it turns out that way, people have to answer for their commissions and omissions.

“A big if, it’s that straightforward. Because all of us have our respective responsibilities and duties to perform and if at any stage it is found that any one of us hasn’t performed our duties correctly and it occasioned this kind of loss, I believe that the honourable thing to do is for us to pay for the ramifications of our action and that I believe will not be difficult to insist on at all,” he said.