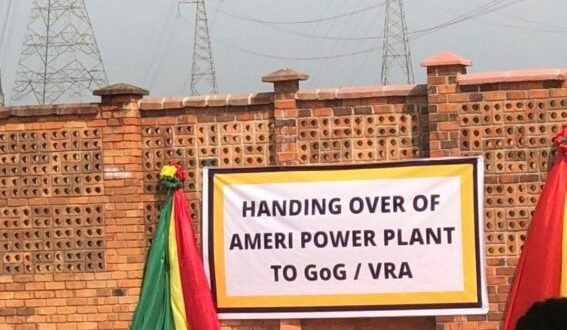 A Deputy Minister for Energy, Mr. William Owireku Aidoo, has stated that with the government’s satisfaction that the AMERI plant at the end of its agreement period is fit for purpose, the legal title to the plant has been transferred into state ownership.

The Deputy Minister announced this when he represented the sector Minister, Dr. Matthew Opoku Prempeh at the formal handing over ceremony of the plant to Ghana by AMERI Co Ltd, at Aboadze in the Western Region on Thursday morning.

Tracing the background of the plant, the Deputy Minister, who is also the MP for Afigya Kwabre South noted that the Build, Own, Operate and Transfer (BOOT) Agreement in 2015 between the Government of Ghana and Africa and the Middle East Resources Investment for a turnkey power solution through the construction of a power plant, which was ratified by Parliament in March 2015, originally stipulated a 60-month payment period.

“Upon the coming into office of the NPP in January 2017, the government took the view that the required payments over the 60-month period were rather onerous on the public purse and took steps to renegotiate it in order to allow the state more room in meeting its payment obligations without default,” he further noted.

This, he noted, resulted in an agreement between Ghana and AMERI to extend the payment period from 60 to 72 months, with a further agreement that the title of the Ameri equipment would be transferred to the government of Ghana upon completion of the extended term (i.e January 2022).

He further recalled that prior to the end of the term, some steps had been taken to ensure a seamless transfer of the plant from the contractor to the government of Ghana.

These include a condition survey of the equipment to confirm that it had been maintained in accordance with the Original Equipment Standards during the period of operation.

On the future plans for the plant, Mr. Aidoo stated that the government has taken the decision to relocate it from Aboadze to Anwomaso in the Ashanti Region to boost the reliability of the power supply in the middle and northern sectors of the grid and also for export.

“Preparatory works for the proposed site are at an advanced stage and progressing on schedule,” he said.

He further disclosed that the project would also promote the extension of the gas pipeline network of Ghana, which hitherto terminated in the Western Region.

The presence of natural gas in the region, he said, would stimulate other productive non-power uses of indigenous natural gas resources.

On behalf of the President, the Deputy Minister expressed his heartfelt appreciation to all those whose hard work and commitment have brought the country thus far, including AMERI, Ministry of Energy staff, VRA and GRIDCo officials as well as all who contributed one way or the other to bring the project to fruition.