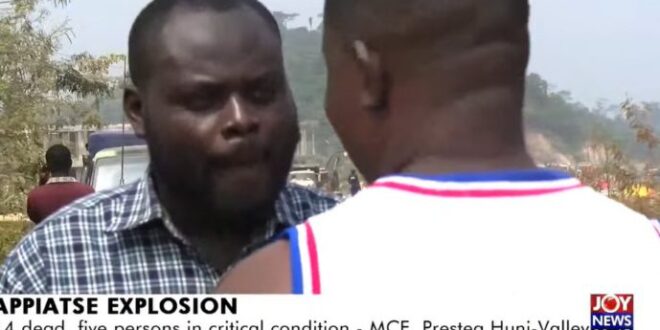 Philip Mensah, the young man whose motorcycle is alleged to have collided with the vehicle carrying explosives at Apeatse on Thursday, has given account of how his vehicle may have been involved in the accident.

According to him, while riding from Nhyireso to Bogoso, he was hit from behind by a vehicle. This came about because the vehicle in front of him stopped suddenly, forcing him to also stop abruptly.

Speaking in an interview with JoyNews; Maxwell Agbagba, on Sunday, he stressed that he never encountered the vehicle that exploded.

“A car hit me from behind. All I heard was a bang. So I fell off and slid on the coal tar for a while. In the process, I saw my motorbike sliding on the road as well. I did not see the car that hit me because it was from behind.”

It was a taxi driver and a welder who rushed me to the Aseda Hospital. I was receiving treatment at the hospital when we heard the blast. Everybody ran, including myself. Later, I saw many casualties being brought in. the Nurses even abandoned me to attend to the seriously injured victims of the accident,” he recalled.

He emphasised that the Doctors and Nurses at Aseda hospital would be able to confirm that he was receiving treatment when the explosion occurred, “I was not on the scene of the accident that caused the explosion,” he said.

Philip Mensah, who was at the scene of the accident, in the company of Police officers, as part of investigations, expressed sadness that an incident with such consequence has occurred, “I feel bad. We are all human, so I am sad. My concern is that people are saying different things. Some said I collided with the explosive-laden car, others said I got burnt etc.”

On Thursday, January 20, about 500 houses were destroyed after an explosion at Apeatse between Bogoso and Bawdie in the Western Region.

Fourteen persons are reported to have died so far and several others injured.

Speaking on The Probe on Sunday, the Deputy Director-General of NADMO, Mr. Seji Saji Amedonu disclosed that the total number of displaced persons is 954.