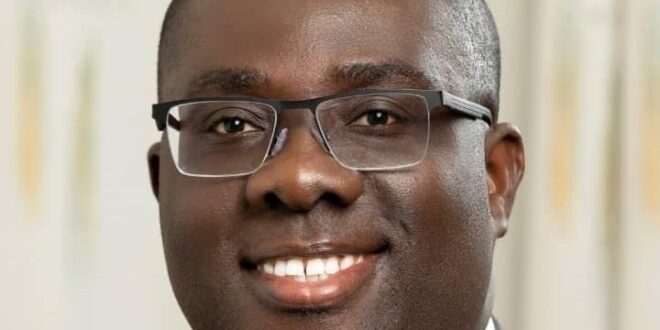 Sammi Awuku as he is popularly called will take over from Kofi Osei Ameyaw who was ordered to proceed on retirement in March 2021.

Sammi Awuku, a former National Youth Organizer of the NPP, is expected to resign from his current position as National Organizer to take over the new role.

He served as Board Chairman of the Youth Employment Agency (YEA) and was twice elected Vice Chair of the Young Democrats Union (IYDU), an international association of the youth wings of conservative parties across the world.

Mr. Awuku is joining the NLA months after staff of the authority threatened to withdraw their services over challenges the authority was going through that led to the non-payment of lottery wins for several months.

The workers in March 2021 also said the poor management of the authority also resulted in the inability to pay salaries for the month of February 2021.

The National Labour Commission subsequently stepped in and directed the workers to abort their threats.

Also, in 2020, an investigative piece produced by Joy News alleged that the cost of some 30,000 Point of Sale (POS) devices procured by the lottery authority was inflated by about $10 million.

The media house suggested that the supply of these devices should have cost less than half of the contract sum of $25 million. The NLA subsequently rubbished the claims.

Awuku, who is extremely admired by many for his strong passion and genuine commitment towards NPP party faithful, democratic governance, youth empowerment, public sector management and institutional governance, is a product of St. Augustine’s College, Cape Coast.

He holds a Masters Degree in International Relations from the Freie University, Berlin-Germany, an Executive Education Certificate in Public Leadership from Harvard University, (Kennedy School of Government) USA, Diploma of Higher Education in Law from the University of London.

He also holds a Postgraduate Certificate in Public Administration from the Ghana Institute of Management and Public Administration (GIMPA), a Postgraduate Certificate in Advertising, Marketing and Public Relations from the Ghana Institute of Journalism and a Bachelor of Arts in Political Science and Psychology from the University of Ghana, Legon.

Mr. Sammi Awuku until recently was a Director of Strategy and Innovation at the April-June Company Limited in Accra and also a Director at the Brain Hill International School.

He has also served as a Board Member of the Accra City Hotel, from 2017 till date.

In the past, he has been thrice elected as the Vice Chairman of the International Young Democrats Union (IYDU), an international association of the youth wings of conservative parties across the world.

He is also a proud alumnus of the American Council for Young Political Leaders (ACYPL), a global platform for identifying and nurturing the talents of young future leaders.

In August 2017 he was named “Continental Youth Icon-2017” by the All Africa Students’ Union (AASU) in recognition of his long-standing contributions towards youth development on the African continent.

Similarly, in August 2014 he was named amongst the top 50 rising African stars by the Paris-based Africa Report Magazine.

Apart from the above, he has also at various stages volunteered his services and provided strategic guidance for the development of various civil society platforms aimed at consolidating democracy and advocating for public sector reforms in Ghana.