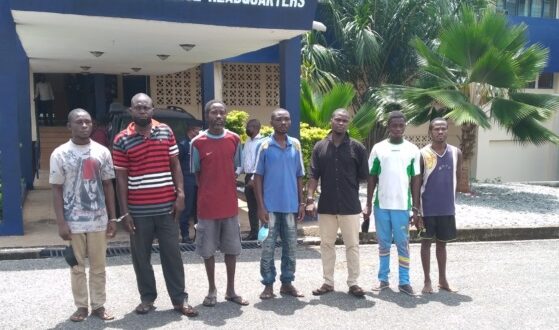 The deceased was said to have gone missing on Saturday, May 22, 2021, at about 7.00am. He was subsequently declared missing after several attempts to search for him proved futile.

According to the Volta Regional Police Commander, DCOP Edward Oduro Kwateng, the suspects were arrested after the Assembly Member for the area led a team to arrest one of the suspects following a tip-off.

The police indicated that investigations revealed the suspects and two other accomplices abducted and killed Cornelius Negble for ritual purposes at a shrine at Nudowukorpe near Tadzewu.

Narrating the shocking incident to the media, DCOP Oduro Kwateng said the remaining six suspects, including a fetish priest, have all been arrested separately in their hideouts.

According to the Regional Police Commander, Interpol in Togo succeeded in arresting some other suspects in the country and extradited them to Ghana to assist in the investigation.

The police told the media that five out of the seven suspects have admitted they played roles in the killing of Cornelius Negble.

The seven suspects have already appeared before the Agortime-Ziope District Magistrate Court for committal proceedings, and the court presided over by Justice Samuel Essel Walker has adjourned the case to 5th July 2021.

Commander Oduro Kwateng further mentioned that on 31 May 2021, police returned to the shrine to effect the arrest of the “abductors and also rescue the victim, Cornelius Negble, but the little boy had been killed, and the head severed and buried in one of the rooms, while the body was kept in a sack which was heavily infested with maggots”.

Further investigation revealed that one of the suspects, Senanu Ashitor aged 28, deals in human parts and had promised to get the fetish priest, Kofi Koko some parts “to perform sacrifices in building a deity to be named Agbevor”.

Exhibits recovered by the police

A search by the police in the shrine helped the police to recover a motorbike with registration number M-19-VR-1348 allegedly used in conveying the body of the victim, a single slipper of Senanu Ashitor, a duster belonging to one of the suspects, Anani Koko and other items.

All the items are currently with the police for evidential purposes.

Escape and arrest of the suspects

DCOP Odoru said upon realising that the two suspects had fled into neighbouring Togo, the police on 18th June 2021, secured a warrant of arrest and extradition order from the court “to enable the arrest of the escapee suspects in the Republic of Togo”.

He said on 19th June 2021, “Interpol Togo succeeded in arresting Kofi Koko and his brother Anani Koko at Voga in Togo, and extradited the two to Ghana to assist in the investigation”.

Meanwhile, the police said another suspect, known as Moris, is also on the run. It thus called on the public to prompt the Ghana Police Service when they come across any suspicious person.