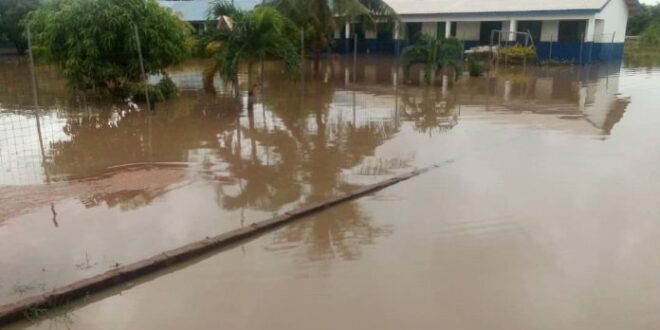 The Monday night downpour within the Akatsi South Municipality in the Volta Region has resulted in a temporary closure of the Human Factor Leadership Academy, a private school in the area.

The downpour, that lasted hours, running into the early hours of Tuesday, also wreaked havoc in several parts of the Akatsi Township and some adjoining communities resulting in the loss of property and personal belongings worth thousands of Ghana cedis.

Mr Winfred Amegatse, the Headmaster of the Academy, told the Ghana News Agency (GNA) that the entire school got flooded, which prevented pupils from attending classes on Tuesday.

“We have been hugely affected by this disaster and it is highly devastating,” he said.

The GNA observed that some office equipment such as computers, files, teaching and learning materials and a school vehicle, have all been lost to the floods.

The pupils have also been asked not to report to school until further notice.

Officials from the National Disaster Management Organisation and the Municipal Chief Executive, Mr Kofitsey Martin Nyahe, were at the affected areas to ascertain the impact of damage.

They called on residents living in swampy areas to quickly evacuate as more rains would set in.

Some affected victims called on the Government and other benevolent groups and individuals to go to their aid as they continued counting their losses.

No injury has been recorded.