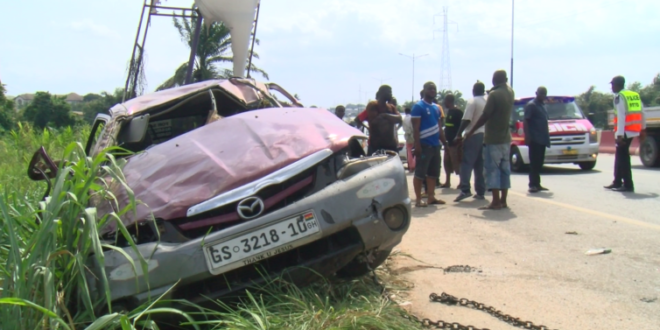 Two people have been confirmed dead after a Ford Escort vehicle somersaulted in an accident at Fumesua in Kumasi.

According to medical officers at the Ejisu Government Hospital, a third victim in critical condition has been rushed to the Komfo Anokye Teaching Hospital.

The family of one of the deceased is blaming the death of some of the victims on the absence of a Doctor at the time of admission.

Five people including a female were traveling in the vehicle to Ejisu.

Eyewitness, Ebenezer Quaye explains the driver of the vehicle lost control after a tyre burst.

“I saw the car speeding and overtaking others. He overtook one car but lost control and the car somersaulted”, he explains.

Family of the victims gathered at the Ejisu Government Hospital to register their displeasure with the care received by the victims.

They say it took more than thirty minutes for a Doctor to show up after victims were rushed to the Hospital.

Clement Antwi explains, “when I got here with one of my siblings, the victims were admitted but there was no Doctor. They later brought the lady out and the ambulance took her away. Later, I asked them what was happening but no one explained anything to us. We later realized there was no Doctor at the Hospital. It took about thirty minutes for one to arrive”.

It took the police to ensure families were dispersed.