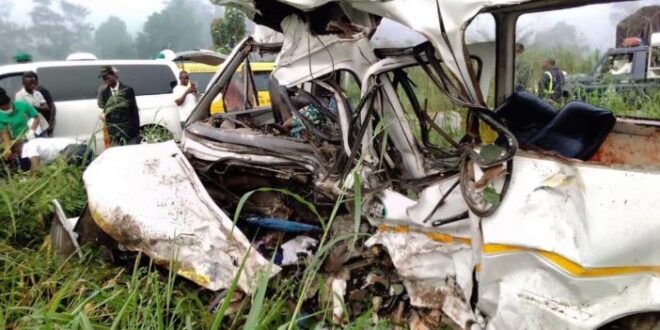 17 dead in accident on Kumasi-Techiman road

Seventeen people, including 10 children, have been confirmed dead in a fatal accident involving a Sprinter bus and an articulated truck in the Abofuor Forest in the Ashanti region.

The truck, travelling from Techiman to Kumasi, fully loaded with logs, is said to have veered off its lane, colliding head-on with the bus, which was travelling in the opposite direction.

All passengers on board the Sprinter bus, two drivers and their mates were rushed to the St. Patrick’s Hospital at Offinso-Maase, but 17 were pronounced dead on arrival.

Among the dead are seven adults – six females and one man – and 10 children – eight females and two males.

According to Superintendent Adu Boahene, four adults and 12 children, some in critical condition, have been admitted to St. Patrick’s Hospital.

The bodies of the deceased have been deposited at the hospital’s morgue pending autopsy and identification.

He has appealed for public support to help trace relatives of victims.

Nhyira FM checks revealed that while the mangled Sprinter bus has been towed to the police station; the articulated truck remains at the scene of the accident.