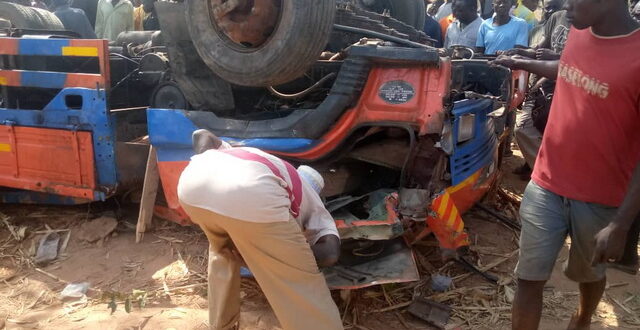 Ten persons died while 23 others sustained injuries on Sunday, January 23, 2022 when a Kia Rhino carrying about 33 mourners to a funeral at a community along the Savelugu-Walewale highway crashed a motorcycle and summersaulted several times.

Six of the victims were said to have died on the spot while four others died later at the Savelugu government hospital.

Confirmation
The Northern Regional Police Crime Officer, Superintendent Bernard Baba Ananga who confirmed the incident, explained that “the driver was trying to avoid crashing the motorcycle rider and veered off the road and summersaulted several times”.

He said the injured were receiving treatment at the Tamale Teaching Hospital while the corpses had also been deposited at the morgue.

According to eyewitnesses, the driver was speeding and in an attempt to avoid the motorist, he lost control leading to the accident.