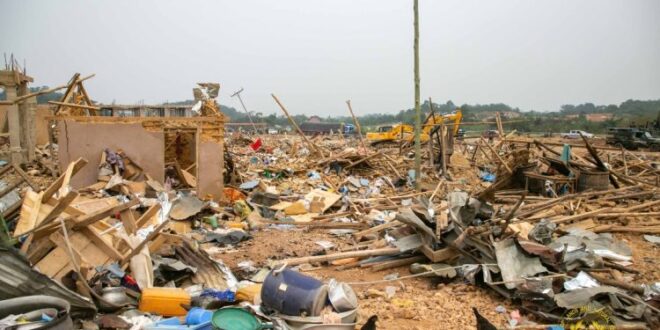 The National Disaster Management Organization (NADMO) in the Prestea Huni-Valley Municipality, has disclosed that 10 children have been separated from their families owing to last Thursday’s Appiate explosion.

According to NADMO, the children, aged between 3 and 12 years old, have been under the care of the Social Welfare and UNICEF while the Organisation is working to integrate them with their families.

The Deputy Municipal Director of NADMO, Luis Afful, told Citi News that some kids have lost their parents.

“We have 10 children who have not seen their parents now. We have not even let them know that this is what is happening.”

“We are yet to find those mothers who have passed out and their children are here. The age range is from age three, five, seven, 10 and 12.”

“Social welfare is also around, so they came in, and they helped us. UNICEF also came, and those kids are well handled,” Mr. Afful said.

At least 14 people were killed, and 179 others injured in the explosion, which occurred on Thursday, January 20, 2022.

The explosion is believed to have been caused by a collision between a vehicle transporting explosives to a mining site and a tricycle.

The truck that was involved in the explosion was heading to Chirano Gold Mines.

According to the mining company, the truck belongs to MAXAM, a mining services contractor.‬

The government is currently probing the incident.