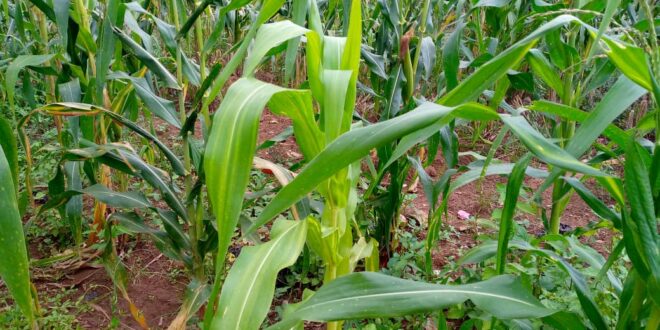 Two renowned farmers, Mr Agoba Moses of Tadzewu in the Ketu North Municipality of the Volta Region and Mr. Bunutsi Kwaku Zowonu of Akatsi District of the Volta Region during an agricultural development educational program on Fafaa Fm alleged that farming with cross pollinated seeds give farmers more profits than local seeds but may have its long term health implications on consumers

Speaking on “Agoooooh” Intervention Morning program on Fafaa FM on Monday morning, Mr Agoba who claimed he has been farming for more than 35years explained that, hybrid seeds if well managed and nurtured with fertilizer as recommended produces two times or more than the local seeds but has its consequences.

With maize in focus, Mr Agoba said the maximum maize that can be harvested from a local maize is about 4 sacks but hybrid can produce about 15 to 20 sacks if same quantity is planted hybrid seeds would produce much more than local seeds comparatively

He further stated that, there’s a particular type of hybrid maize that is planted one maize per hole and about 4 feet spaces between them which gives farmers not less than 20 sacks after harvest if managed well.

Mr. Bunutsi also added that, even though every farmer’s aim is to make profit from farming and hybrid seeds seems to be the best alternative to achieve financial gain they still need to revise it’s long term effects on the consumers.

During the interview with the host of the intervention morning show , Mr. Dravie Raymond Romeo, both farmers expressed some challenges faced by farmers in planting hybrid seeds

According to them, hybrid maize does not mill easily and smoothly as compared to the local maize. They also mentioned that, worms terns to destroy hybrid maize on the farm easily than the local maize and in preventing the worms from destroying the maize, farmers use agrochemicals that are poisonous for human consumption.

According to the two farmers , hybrid maize cannot be re- planted again compare to local maize and the local maize has its competitive advantage over it’s hybrid counterpart in this regards

In conclusion, both farmers suggested that using our local traditional maize seeds is far better than hybrid seeds , because hybrid seeds require much more usage of agro-chemicals which may have health implications for the consumer

They also advise consumers to be ready to buy the local maize at fairly higher price because it is very rare to get these days since most farmers prefer the use of hybrid seeds without recourse to its long term effect on the consumer.

Among them was Mr. Bright Quarshie, a farmer from Keta Abutsiakope who expresses worry and called some of his co – farmers as ” intentional killers” just for the sake of monetary gain, hence their choice of hybrid seeds over traditional seeds.

Watch out for further investigations on the subject matter ……………….