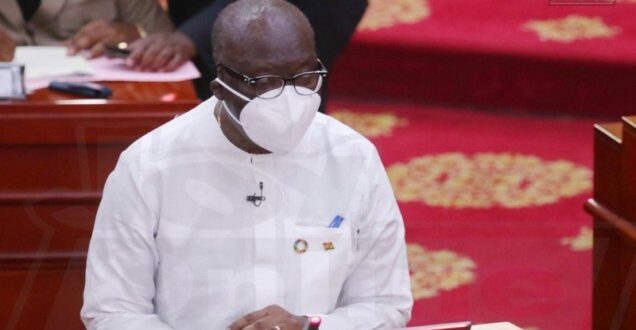 Finance Minister, Ken Ofori-Atta has revealed that government will withdraw the almost $1billion from the International Monetary Fund (IMF) to support the economy.

According to the Minister, this is needed to aid the ongoing economic recovery.

Mr. Ofori-Atta added that, government will target some critical areas that will help in fast-tracking the recovery of the economy.

According to him, government is considering directing the funds to sectors that will aid in job creation as well some areas under the Ghana Cares Programme.

At the same time, areas such as improving revenue mobilization and digitalization of the economy is being prioritised.

Ghana and the Special Drawing Rights

The IMF Board earlier this month, approved $650billion to support member-countries in the fight against the Covid-19 pandemic. Member-countries are expected to have their accounts credited with their share of the $650billion from August 23, 2021.

According to the IMF, this move would ensure that its members, including Ghana, have a strong external position to voluntarily channel part of their SDRs to scale up lending for low-income countries through the IMF’s Poverty Reduction and Growth Trust (PRGT).

There were initial reports that Ghana may not be able to withdraw the funds because of some debt obligations to the IMF. But Government explained that the challenge has been dealt with. Hence, there is no need for the concerns.

Some analysts have argued that the funds hitting Bank of Ghana’s accounts, may also help in improving Ghana’s reserves a move that will help stabilize the Ghana cedis.

Establishment of the Ghana Development Bank

The Finance Minister has also disclosed to JOYBUSINESS that he is optimistic that the Development Bank of Ghana will fully start operations from October this year.

“We have sent the final list of all the Board Members and waiting for Bank of Ghana’s approval” he added.

The Minister also revealed that they have appointed the Chief Executive of the Bank and government is expecting them to fully takeoff once the necessary approvals from Bank of Ghana are secured.

The Minister has also disclosed that he is optimistic about Ghana’s Revenue situation improving in the coming months. This is based on ongoing reforms and some projects being undertaken by the Ghana Revenue Authority.

Ken Ofori-Atta is also banking his hopes on the decision to replace the Tax Identification Numbers with the Ghana Card. This, he said, “will allow the Revenue Authorities to better identify activities of individuals in relation to their tax obligations activities, a move that will help better assess the tax obligations of these persons.”

He added that, “we are looking forward to the Ghana.gov portal also helping improve Ghana’s revenue mobilization going forward. So far, more than $20billion has passed through this platform since last year, and we believe that things will get better.”

Mr. Ofori-Atta added that with the application of technology in revenue mobilization, the expected turn around should happen soon.

“Ghana is currently doing about a tax to GDP ratio of 13 percent that is far lower than the regional average of 19 percent. But we are optimistic of things getting better going forward,” he said.

Banking Sector clean up and impact on economy

On the recent Banking Sector clean up, the Finance Minister noted that, the exercise has gone a long way to help stabilize the banking sector and the economy as a whole.

“You can see it yourself, the impact on the Ghana cedi, inflation and the strengthening of banks in the country. We believe that Ghana has a more sanitized system that we all can be happy about,” Ken Ofori-Atta added.