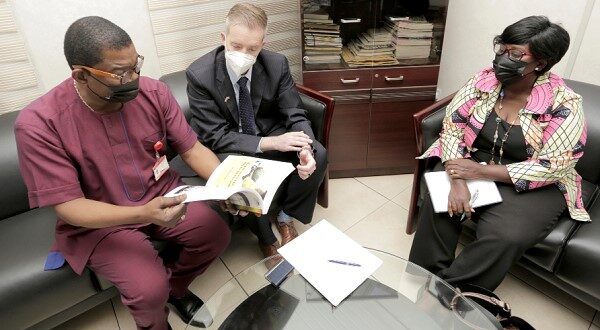 The Press Attache of the United States Embassy in Ghana, Mr Kevin J. Brosnahan, has paid a working visit to the News Department of the Graphic Communications Group Ltd (GCGL).

Accompanied by the Information Assistant, Mrs Joyce Okyere Asiedu, yesterday’s visit was to familiarise himself with the operations of the Daily Graphic and its sister newspapers, build on the relationship between the embassy and the media house and discuss areas of support and collaboration.

The Editor of the Daily Graphic, Mr Kobby Asmah, received the US Embassy delegation. Also in the meeting was the News Editor, Mr Samuel Doe Ablordeppey; the Assistant Editor of Graphic Business, Mr Charles Benoni Okine, and the Photo Editor, Mr Douglas Anane-Frimpong.

In brief remarks, Mr Brosnahan expressed the commitment of the US Embassy to support the media and training for journalists in line with its belief in press freedom.

He said the embassy in the past had supported a lot of journalists and would continue to offer that help to deepen the media landscape in the country.

“The Daily Graphic has a very strong reputation and it is the first newspaper I read every morning. So we are here to deepen our relationship,” he said.

“We also want to support journalists on the field as we have supported a lot in the past,” the US Embassy Press Attache said.

Mr Brosnahan said press freedom was very dear to the US and within its limited budget the embassy was still committed to help deepen the quality work of journalists.

Capacity building in areas of the right to information, human rights reporting and focus on the marginalised in society are some of the areas the US Embassy will be supporting journalists to sharpen their skills.

The Editor, for his part, expressed how grateful the company was to forge such a close relationship with the US Embassy, which had seen the Ambassador, Ms Stephanie S. Sullivan, and previous ones visit the Daily Graphic.

“The relationship between the GCGL and the embassy is healthy and we can only do better by deepening it; we must continue with the engagement,” Mr Asmah said.

He underscored the essence of continuously training journalists, saying the GCGL and its brands needed it at all times because of the mandate on it to inform the nation and steer the national course.

“As for training, the media need it at all times because of the mandate given to us, except you want to be reckless. This will enable us to serve our country better, the Daily Graphic Editor said.

Mr Asmah also solicited the support of the US Embassy for the GCGL to archive its vast collection of information and data, being the media house that had chronicled the country’s history the most.

“The capacity and ability to do this very effectively is lacking and this is an area that we will need support.

“We should be able to archive our information and pictures over the years in such a way that we can access them by a click of a button.

“So, in my view, it’s urgent that all efforts can be made to get a proper archival system. If we can get support here we will be very grateful. It can help generate additional revenue for the group and the country as a whole,” Mr Asmah pitched.

The Editor of the Daily Graphic also informed the US Embassy Press Attache and his assistant that the group had revived the publication of the informative Ghana Year Book (GYB) which was stopped over four decades ago.

As part of the 70th anniversary of the GCGL, the company decided to revive the publication, which used to be a prominent feature and reference document for individuals and organisations.

The other editors also commended the delegation, the support the US Embassy gave journalists and welcomed the decision to organise some training programmes for media practitioners.