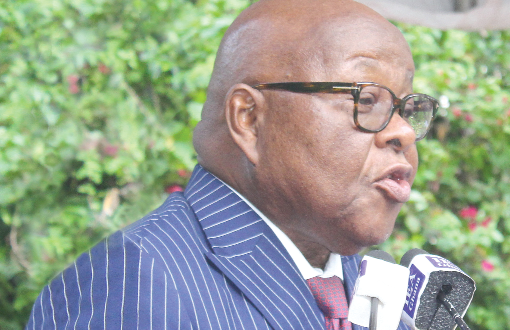 A former Speaker of Parliament, Professor Aaron Mike Oquaye, has proposed the establishment of an independent National Development Planning Commission (NDPC) that will craft development programmes devoid of political interference.

He said the members of such a commission should be appointed from independent sources, including academia, civil society and religious bodies, and must have autonomy.

He noted that the politicisation of the NDPC and the abandonment of various projects started by predecessor regimes were greatly hurting the nation.

Prof. Oquaye made the proposal at the inauguration of a Centre for Constitutional Studies at the Institute of Economic Affairs (IEA) in Accra last Tuesday.

The centre is named after Prof. Oquaye, who is also a distinguished constitutional scholar.

Speaking on the topic: “Reviewing the 1992 Constitution of Ghana and Beyond”, Prof. Oquaye did not downplay the importance of the NDPC.

Nevertheless, he noted that the present state of a pendulum in development, where governments introduced new policies during their tenure, only for those policies and attendant projects to be abandoned immediately those governments left office, was tragic.

Quoting Article 35 (7) of the Constitution, which provides that as far as practicable, a government shall continue and execute projects and programmes commenced by previous governments, Prof. Oquaye said the politicisation of the NDPC and its development agenda was worrying.

He, therefore, suggested an independent NDPC that would elect its own chairperson and vice-chairperson, who should hold office for not less than six years.

Indeed, what the NDPC planned must be a guidepost to all governments, he stated.

The former Speaker posited that the Constitution gave Presidents too much power in the appointment of members of the Council of State.

For instance, he said, it was problematic for the President to have a free hand in choosing 11 people onto the council.

“It should be pointed out that, customarily, no chief in Ghana has power to appoint his elders and advisors this way. The elders are heads of the various lineages and they come to the council by right,” Prof. Oquaye said.

Suggesting remedies, he said there was the need to introduce institutional representation and not allow the President to choose his advisors.

He further said the tenure of members of the Council of State could be six years, so that it would overlap various general elections.

Again, he stated that the council should be enlarged to accommodate a good number of institutional representations.

The former Speaker said there were areas in the Judiciary that needed reforms to strengthen the system.

He mentioned the appointment and removal process of judges as one of such areas, adding that although justices of the Supreme Court were appointed by the President, on the advice of the Judicial Council, the membership of the council itself could be problematic

He said once the Chief Justice was roped into a plan to remove a judge, the process became easy.

“Can you imagine any three judges who are bias or appointed for the purpose and any two persons from the President’s political party can give a simple majority at any time to remove a judge?” he quizzed.

Consequently, Prof. Oquaye made some recommendations to sanitise the situation.

He suggested two retired justices of the Supreme Court, nominated by the Roll of Retired Supreme Court Judges, two senior lawyers nominated by the Ghana Bar Association at a meeting called for that purpose and three other persons nominated from the Christian Council, the Catholic Secretariat and the Muslim Council, saying: “They will do a better job.”

Prof. Oquaye said one tragedy of the constitutional system was that although a vote of censure against ministers was provided for in Article 82 Clause 5, a vote of censure could not remove the minister because that discretion rested with the President.

He called for a revisit to the 1979 Constitution, where no MP could become a minister, saying: “We need to revisit this in order to strengthen the position of MPs. Also, a vote of censure will necessarily lead to the removal of a minister.”

While calling for reforms in the decentralisation programme to enable it to become a tool of development, participation and decision-making, Prof. Oquaye said one-third of appointments to the district assemblies by the President should be left to women.

He also called for the election of metropolitan, municipal and district chief executives to wean them off Executive control.

Besides, district assembly elections should be held two years away from national elections.

Describing corruption as a cancer which continued to eat up developing nations, the former Speaker said there was the need to streamline and bring into effect laws regulating corruption in the country.

Equally important was the need to strengthen all institutions which dealt with corruption, he noted.

He said a legal regime for the prosecution of all corruption cases should be provided, since court prosecutions continued to collapse and victims got away with offences.

He said issues of unemployment, the national housing deficit, education, health and agricultural development should be looked at.