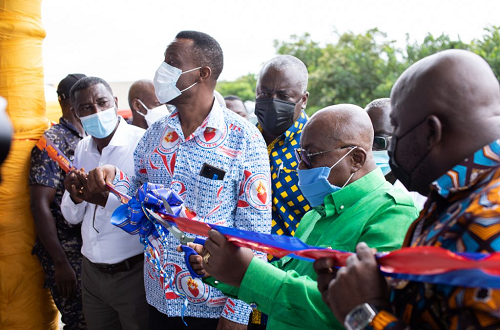 President Nana Addo Dankwa Akufo-Addo has commissioned a wholly owned Ghanaian rubber processing factory at Dompim No.1 in the Wassa East District in the Western Region.

The plant, valued at more than $2.8 million, is under the One-District, One-Factory initiative of the government.

Known as NARUBIZ Limited, the plant is the second rubber processing factory in the country and will provide an off-taker opportunity to rubber farmers and plantations in Wassa and other parts of the region.

It has the capacity to process a tonne of latex per hour, an average output of 625 tonnes per month through three shifts per day.

The factory will provide direct employment opportunity for 85 people and for more than 1,260 others made up of latex harvesters, farm maintenance workers and transporter services, among others.

President Akufo-Addo, who commissioned the factory yesterday as part of his ‘Thank You’ tour of the Western Region, said 1D1F was one of the avenues the government had initiated to create jobs and sustainable food supply.

The President said the first public-sector-led industrialisation in the country took place in the 1960s, but many collapsed largely as a result of mismanagement after 1966.

“When I became the President, I made a promise that I would pay regular visits to all regions where projects are ongoing to ensure that they are delivered to the people,” he said.

He thanked the chiefs and people in the region for the massive support they offered the New Patriotic Party (NPP), leading to their victory in the December 7, 2020 general election.

Speaking to the media after the commissioning, the Managing Director of NARUBIZ, Mr Emmanuel Akwasi Owusu, said the factory was the first Ghanaian owned rubber processing plant in the country.

“Indeed, the inauguration of this rubber processing factory marks an important milestone in the rubber industry and for the promotion of entrepreneurial culture in this country,” he said.

According to Mr Owusu, from the setting up of the factory in February 2020 until its completion, “we have enjoyed various incentives and exemptions under the President’s special initiative, the 1D1F programme.”

NARUBIZ has currently signed an off-taker agreement with Sai-commodities, a commodity trading firm in the UK, for the export of processed rubber to Malaysia and China in Asia and Turkey and some other European countries.

The factory also intends to increase its processing capacity to five tonnes per hour in two years and branch into the manufacturing of fan belts, rubber bushings, among others, for the automobile industry within the next five years.