Breaking News
Home / BUSINESS / ‘No one loves to pay taxes, but there’s no other way’ – Otumfuo 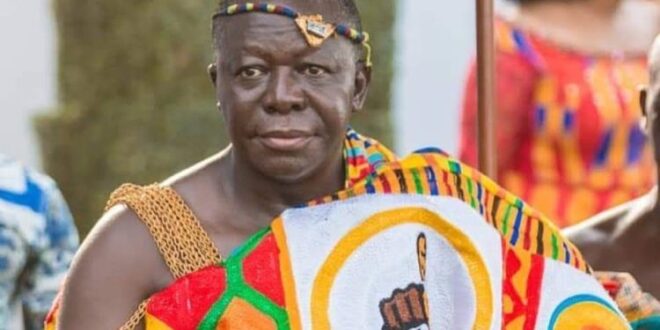 ‘No one loves to pay taxes, but there’s no other way’ – Otumfuo

The Asantehene, Otumfuo Nana Osei Tutu II, says the payment of taxes by citizens of every country is one sure way by which countries are developed.

His comments come on the back of the raging controversy and widespread disapproval of the 1.75% levy on electronic financial transactions announced by the government in the 2022 budget statement.

He explained that even though no one loves paying taxes, there is no other way governments can raise revenue to meet the demands of the citizenry.

The Asantehene, who was speaking at the launch of the Otumfuo Osei Tutu II Commemorative Gold Coin on Sunday, December 12, 2021, said there’s no country in the world where citizens don’t pay taxes, adding that good citizens pay taxes.

“We have been fortunate in our political journey to have moved on from a period of one political party dominating everything. Today, at least the two main political parties have all been in government. If we are honest, we will agree that there is no perfect government and there will never be as long as we have different points of view.”

“And if we are honest, we will also agree that there are no people in this world that love paying taxes, and yet there is no other way conceived by the human mind by which government can raise the resources to meet our needs other than by raising taxes. I do not know of any form of taxes that is less painful than others. So at last, government, by all means, would have to raise taxes to meet our needs and if we are good citizens, we will pay our taxes.”

Many critics of the e-levy policy have argued that it will erode gains made in the financial inclusion drive, and will also almost amount to double taxation and end up being counter-productive as the government’s revenue target would not be met.

Otumfuo Nana Osei Tutu II also advised legislators not to use their entrenched positions to frustrate the government from performing its legitimate duties.

According to him, the lawmakers were only representatives of the people, and it was not their duty to determine policies for the government.

“We elect people to represent us to make sure there is some equilibrium in what governments do. It is to our good that our representatives in Parliament subject the national budget to the most rigorous scrutiny and to call for changes.”

“Government must also have the humility to acknowledge and embrace the useful inputs from all sources, but our representatives need to bear in mind that it is not their role to either determine policy or to frustrate the executive from performing their legitimate duties.”

The Asantehene made the remarks at the launch of the Otumfuo Osei Tutu II Commemorative Gold Coin on Sunday, December 12, 2021.

There is some seeming delay in the approval process of the 2022 budget, occasioned by entrenched positions held by the two caucuses in Parliament on aspects of the budget.

However, both Majority and the Minority caucuses have pledged to build consensus towards the approval of the budget.

Meanwhile, the Minority Caucus has indicated its strong resolve to reject the government’s proposed 1.75% E-levy in its entirety.

It said it will kick against the levy in any shape or form since it will inflict more hardship on Ghanaians.

“It is true that we engaged. We were part of the engagement, but at that engagement, regrettably and unfortunately, on the matter of e-levy we could not have agreement and consensus.”

“We believe that the e-levy is punitive, and will undermine our quest to grow a digital economy in seeking to tax transactions,” the Minority Leader, Haruna Iddrisu said in Parliament on Tuesday, December 7, 2021.

Meanwhile, the Majority Caucus have also said it is the e-levy is the only means the government can raise revenue to meet the demands of Ghanaians aside from borrowing.