Breaking News
Home / BUSINESS / ‘I believe in God, but I don’t take everything in the Bible’ – Prince Kofi Amoabeng 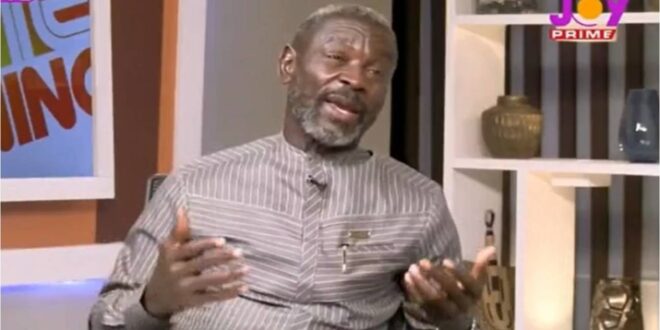 ‘I believe in God, but I don’t take everything in the Bible’ – Prince Kofi Amoabeng

Co-founder of defunct UT Bank, Prince Kofi Amoabeng has disclosed his stance on God and the main instructional manual for Christianity, the Bible.

According to the Ghanaian businessman, even though he’s convinced about the existence of God and his supremacy in the affairs of the universe, he does not entirely agree with some portions of the scripture.

The ex-military officer expressed these opinions when he was asked about his belief in the existence of heaven and hell on Prime Morning, on Monday.

According to him, the concept of heaven and hell, as recorded in the Bible are not real; explaining that, heaven and hell are both present here on earth. For him, an individual’s deeds on earth will determine the quality of his life.

‘Heaven and hell, it depends on you. If you think you’ll go to heaven or hell after here fine. But if you do good here, you’ll reap the benefits here’, Mr. Amoabeng explained.

The former UT boss also added that “I believe in the Bible, but I don’t take everything in the Bible. It was written by humans and God inspires me too,” Mr Amoabeng remarked laughingly.

In his submissions, he recounted his trajectory as a military officer, and how he eventually ventured into Ghana’s business terrain, setting up the UT bank.

Even though his brain child, UT Bank was closed down as a result of government’s financial sector clean-up in 2017, Prince Kofi Amoabeng intimated that, he’s happy about the outcome of events, attributing everything to God’s orchestration.

According to him, age is catching up on him, and he has done his best, and therefore nurtures no ambitions of resurrecting his defunct bank or creating a new one altogether.