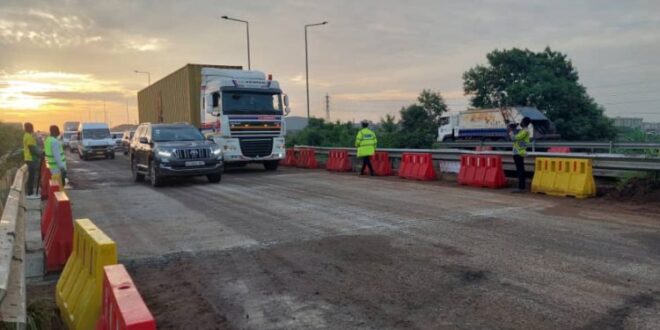 Tema Motorway opened to motorists after completion of repair works

Portions of the Accra-Tema Motorway, closed to traffic on Monday, have been opened following the completion of repair works on a dilapidated bridge on the stretch.

It was opened today, Friday, June 17, 2022, to motorists as promised by the Roads and Highways Minister, Kwasi Amoako-Attah.

The road was opened at exactly 6:06 am by the sector minister.

He indicated that the bridge has passed the integrity test and drivers can use it without fear.

“Those of us at the Highway Authority are happy that we have been able to work around the clock to make sure that the government’s promise has been fulfilled. It was a challenge, but we assured that it was not unsurmountable. That is President Akufo-Addo’s government for you. Anytime the government talks, it delivers beyond the imagination of many people. That is why within the shortest possible time, the problem has been fixed”, he said.

Commuters endured massive gridlock in the last few days as a result of the repair works on the bridge over the Lakplakpa River.

But the Ministry of Roads and Highways assured to complete the emergency repair works on time to allow for free flow of traffic on the highway.

It promised that the contractors on the project were working day and night to ensure that the work was completed speedily.