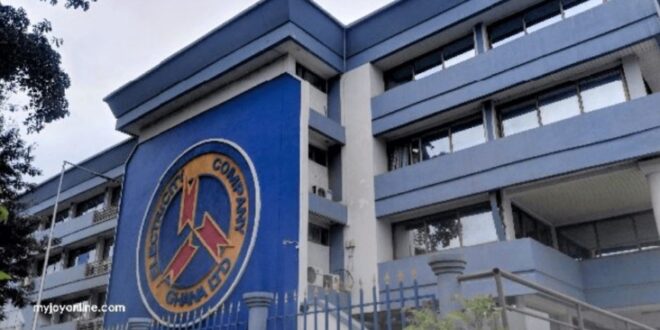 The Electricity Company of Ghana (ECG) has given Parliament House, Communications Ministry, University of Ghana, the United Nations Development Programme and 31 other institutions, a three-day ultimatum to settle their indebtedness or face disconnection.

The ECG on Friday served disconnection notices to some institutions which have refused to pay for power consumed.

According to the power distribution company, the affected institutions owe it an amount close to GH¢70million and have failed to settle their debt despite several reminders.

The ECG stated that it will not spare any institution which fails to meet the deadline.

The following are the debts owed by some of the defaulting institutions;

The notice by ECG also highlighted that the company’s task force last year monitored 135,000 metres of which 15,000 were detected to have been illegally connected.

The ECG noted that an amount of GH¢74million was then raised against the defaulters and illegal power operators, of which GH¢66.5million was retrieved with the rest of the debt yet to be collected.

The company said between January and March this year, the ECG’s task force monitored 30,707 metres out of which 2,235 metres with anomalies and illegal connections were detected.

It said an amount of GH¢10.587million was involved as charges raised against defaulters and illegal operators. ECG has so far recovered GH¢6.9million of the charges.

Public Relations Officer with the Accra West Division of the ECG, Mary Eshun Oppong told JoyNews that institutions like the Ghana Airports Company must make an additional payment to avoid disconnection.

“Those 27 institutions, some have come to make payments, others too have paid part and we’ve given them the schedule. We have given them some period to be able to pay the debt. For now, we have added another 29 institutions to the list which we are going after them because they are also owing. We also have individuals like MPs, politicians who are owing,” she stated.

She revealed that some embassies and foreign missions have also refused to pay for power consumed. She said despite the diplomatic impediments, they will still go ahead and take off the grid if the demand for payment is not respected.

“We have some embassies also owing us and for the Embassies we will come after them, so we are just appealing to them. If they are listening to this news, they should just come to our offices and make payments,” she said.

Last month, the National Task Force of the ECG Limited cut power supply to the Ghana Airports Company Limited (GACL) over debt to the tune of GH¢49 million.

According to the Team Lead, Nene Shadrack Mase, the debt is affecting the operations of the ECG, hence the need to embark on such distress actions.

“We gave them prior notice last Friday, but when we came they [GACL officials] said they don’t know us and are not ready to cooperate with us.

“GACL owes ECG GH¢49 million, but wants to pay just GH¢1 million which we believe is too small considering the amount owed. We are at least expecting 50% of the debt or better still GH¢5 million”.

The GH¢49 million debt has to do with current and past electricity consumption owed by the GACL for six electrical meters, including the Terminal 3 and the runways.