Breaking News
Home / BUSINESS / Digital economy is the biggest in the country; it’s not had any taxation at all – Akufo-Addo justifies E-levy 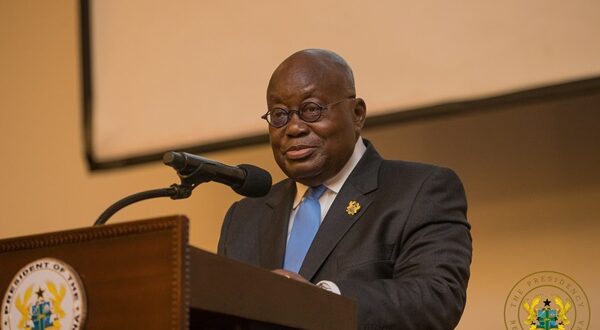 Digital economy is the biggest in the country; it’s not had any taxation at all – Akufo-Addo justifies E-levy

President Akufo- Addo has justified the imposition of the Electronic Transaction Levy (E-Levy).

He emphasised that it has become necessary to tax the mobile money industry.

The tax, which has been opposed by sections of the public with some describing it as an obnoxious tax, was passed last week by Parliament.

Speaking to Peter Okwoche of the BBC’s Focus on Africa show, on Monday, the President dismissed suggestions the levy will further impoverish the poor in the country.

“There are experts in government as well and we think it [E-levy] is necessary and that’s the reason why we introduced it. We are talking about taxing an industry and transactions where there are a lot of values being created and we also want to bring those values into government coffers.

“The digital economy is emerging, it’s the biggest economy in the country and for a long period it’s not had any taxation at all and so it is important that they also come into the tax net. Our country is one of the lowest tax to GDP ratios of any country in West Africa and of equivalent economy. I don’t know any group of people, especially businesses when taxes are brought to them they like it,” President Akufo-Addo said.

President Akufo-Addo maintained that the current woes of the country’s economy are due to the economic disruptions in the past two years caused by the Covid-19 pandemic.

He said the fundamentals of the economy are strong such that even in hard times of the global economy in 2020, Ghana still recorded positive economic growth.

The President also dismissed comparisons of Ghana’s economic figures with that of the western world.

“It has been a difficult task for all the economies in the world. I think it is important that when you are making a provocative statement, you situate yourself and you speak as if you are living in the same time as you and I, when the world economy as a whole has gone through very difficult times. I can quote you a whole series of statistics about the American economy, the British economy but those things don’t serve a purpose. All that is being recognised is this phenomenon that is going around which would make life difficult, what are you doing to try correct it. That should be the view and that is what we are trying to do,” he said.

He said that despite the ravages of the Covid-19 pandemic and the Russia-Ukraine crisis on the Ghanaian economy, his government has introduced recovery measures to take Ghana out of the economic trench.

“The recovery programme that we have is one that is considered very credible and it is what is going to give us the opportunity to come out of this period a stronger economy and it is that future that we are looking at when we are attracting people,” he told the BBC.

Meanwhile, the Minority NDC is challenging the passage of the E-levy bill in the Supreme Court.

They contend that Parliament did not have the required number of at least half of its members present when the controversial tax policy was approved.

The Tamale South MP and his colleagues want the Supreme Court to declare that the said approval was contrary to law.