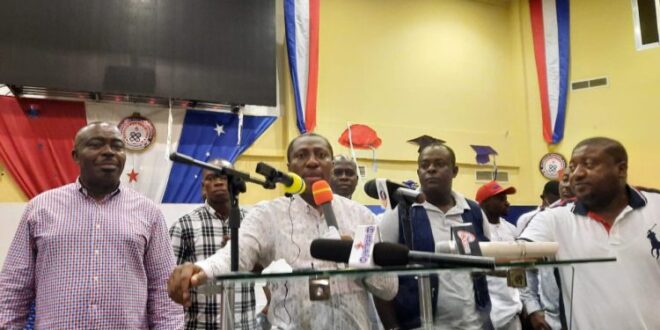 Demand accountability, transparency in use of E-levy proceeds – Afenyo-Markin

The Member of Parliament for Effutu, Alexander Afenyo-Markin, is urging Ghanaians to call for a more transparent systems of disbursement of proceeds from the E-Levy that has now been passed into law.

The Effutu MP also wants the Finance and Roads Ministers to be summoned before Parliament on a quarterly basis to give an update on the state of the funds.

He believes this will ensure that the money which has been earmarked for major developmental projects and social intervention policies are used for that purpose.

Speaking to Citi News at the homecoming ceremony organised by the Tertiary Student Confederacy chapter (TESCON) of the University of Education, Winneba, Mr. Afenyo-Markin indicated that achieving a transparent system of disbursement will prove to Ghanaians that the monies from the levy have been used for the purpose for which it was established.

“I am saying that we should call for a transparent system of disbursement and we should call on the finance minister and roads minister to be reporting to parliament at least every quarter so that if you are in your village paying momo tax, once you hear in Parliament that the road that was not accessible is going to be construted, at least you know the money is being put to good use.”

“I think that is the concern of many Ghanaians and that is where we should direct our energies,” Mr. Afenyo-Markin argued.

The E-levy will introduce a 1.5 percent tax on electronic money transfers.

President Akufo-Addo assented to the Bill on Thursday, after it was passed earlier in the week.

The levy, which was eventually amended from 1.75 percent to 1.5 percent on Tuesday, will be a tax on electronic transactions, which includes mobile-money payments.

The charge will apply to electronic transactions that are over GH¢100 on a daily basis.