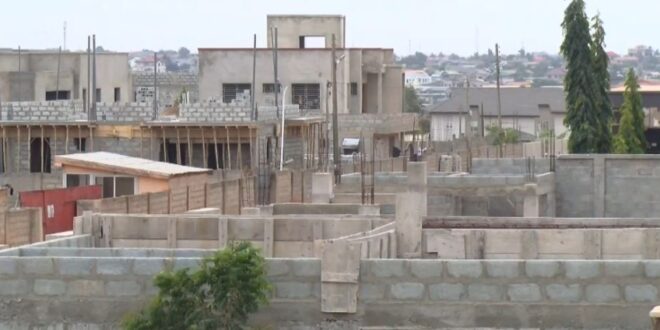 Accommodation has become expensive in the country’s capital, with rent charges accounting for larger proportions of the monthly earnings of average public and private sector workers.

Despite the rapid growth in population and the high demand for accommodation, there also exist a limited supply of quality, secure and affordable housing for people.

On daily basis, many people line up in the corridors of the Rent Control office to seek a resolution to their rent problems.

With the cost of food, fuel and transport going up, high rent charges are driving many people insane in the capital and other cities across the country.

During a visit at the premises of the Rent Control, JoyNews uncovered how some tenants are struggling to keep a roof over their yet-to-be-completed houses.

A tenant, Martin Torgbor, sat in a pensive mood. His landlord has been increasing rent charges over the years and it is now becoming unbearable.

In about 8 months, he has had to cough up almost ¢9,000 or risk being on the streets with his two sons. He teaches music in a school near Burma Camp.

Before then, he lived in a teacher’s bungalow. But his renting woes began when he was transferred.

“It’s been a very difficult task to pay the rent. Essentially, you are not within a resident bungalow as where you work. I was not going for loans to pay the rent. I used my part-time teaching piano here and there to pay.

“Unfortunately, things didn’t go well. Rent issue is becoming a headache and is driving a lot of people crazy. If you are hungry and can take water and find a place to sleep, you will be of a sound mind,” he said in an interview on the Living Standard Series.

Martin’s case was just a drop in the ocean.

A disgruntled 60-year-old woman, Adiza, stormed out of an office where her case was heard.

She claimed her landlady was evicting her only two weeks after moving into her house but she seemed unsatisfied with the outcome of the resolution.

She explained that getting a place to rent is one of the most frustrating endeavours and it doesn’t come cheaply.

“I am yet to get a house, I paid ¢4,800 but she is evicting me. How can she do that? It looks like she paid her way through. It’s not easy; renting is expensive,” she said.

Meanwhile, her landlady, Ernestina, was equally upset. Renting out her house for the first time has been an unpleasant experience, she indicated.

She has decided to venture out of the renting business.

According to her, prices of building materials have shot up, making construction extremely expensive.

“This is my first time renting my house. I heard stories but I didn’t believe; now I have experienced it. I won’t rent out again. Tenants should try to respect landlords because building materials are expensive,” she said.

For Ramatu, her rent has gone up more than 50 per cent.

As a single mother of five who migrated from Bawku to Accra, she wondered how she would afford it.

“The landlord says rent has increased to ¢150; I will also have to pay the agents and how am I going to afford it?” she asked.

Meanwhile, data from the 2021 Population and Housing Census shows that the country’s housing deficit is over 1.7 million.