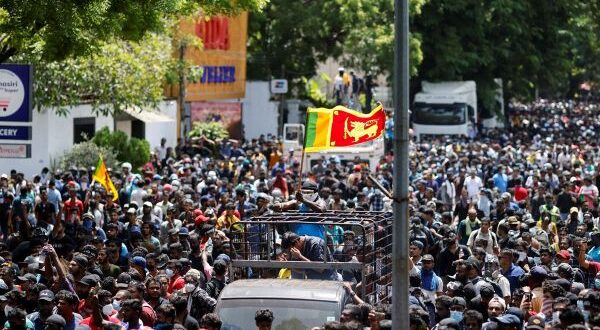 Barely hours after Sri Lankan President Gotabaya Rajapaksa fled the country on Wednesday, hundreds of people were demanding the resignation of the prime minister as well and fighting street battles with riot police.

“Ranil go home!” they chanted as they tried to storm the office of Prime Minister Ranil Wickremesinghe.

Police fired repeated rounds of tear gas and Wickremesinghe, who was acting as the president in his absence, declared a nationwide emergency and clamped a curfew in the city and surrounding areas.

The protesters see him as an ally of the Rajapaksa clan and want him out.

“We want Ranil to step down,” said S. Shashidharan, a 30-year-old who said he was tear gassed outside the prime minister’s office. “Arrest all those who helped Gota (the president) to escape. We want our stolen money back.”

In contrast to the street battles at the prime minister’s office, hundreds of people queued peacefully to tour Gotabaya’s official residence, just a few kilometres (miles) away.

K.K. Subasinghe was one of those in the line waiting to go into the home of the once-feared former soldier, who boarded a Sri Lankan air force aircraft and fled to the Maldives early on Wednesday morning, accompanied by his wife and two bodyguards.

After massive protests against his rule on July 9, Rajapaksa told the speaker of parliament that he would step down.

Subasinghe said he too served in the Sri Lankan army, fighting in the country’s bloody civil war against Tamil Tiger guerrillas. The war ended in 2009, under the direction of Rajapaksa, then the defence secretary.

But Subasinghe said he had little admiration for Rajapaksa, and had brought his family and brother along to show them the opulence of the presidential residence.

“I wanted to give them a glimpse of their (the Rajapaksas’) luxurious lifestyle,” Subasinghe said, dressed in a collared t-shirt and khaki pants, holding a green plastic bag.

“While we were suffering, they asked us to grow our own food and ride on cycles.”

Subasinghe said he expected massive celebrations when Rajapaksa finally resigned, although there was still some trepidation among others in the queue that he would actually quit.

“We’ll celebrate this momentous day,” he said. “I think that the protest will become stronger than July 9 if he doesn’t resign.”

The crowds circled the gardens surrounding the two-storey colonial-era building, where some napped in the grass and others took selfies on their mobile phones.

Volunteers guided groups past the president’s swimming pool, where protesters had partied last week. A lone young man was in the murky grey waters as they passed by.

Inside the main building, Subasinghe and his family could only access a small portion of the ground floor. The rest, including the bedroom and large halls, had been roped off by protest organisers.

“I never expected this sort of luxury,” said Subasinghe’s elder brother, M.D. Chandradasa, as they finished their tour of the residence.

“It’s okay if you’re the head of state but what about us poor people?”