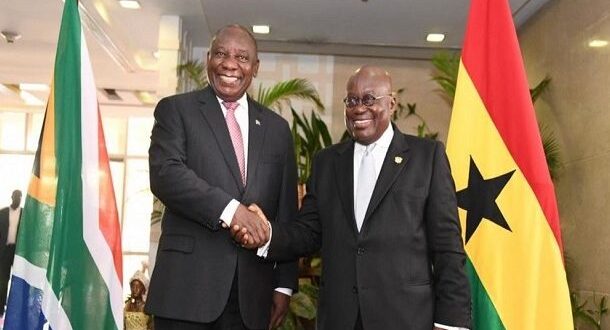 South African President, Cyril Ramaphosa was in Ghana from 3rd to 5th December 2021, for a State Visit.

His two-day stay in the West African nation was at the invitation of His Excellency, Nana Addo Dankwa Akufo Addo.

The State Visit to Ghana was directed towards enhancing bilateral relations premised on mutual respect, commitment to democracy, good governance, rules-based multilateralism underpinned by the rule of law, respect for human rights and fundamental freedoms.

However, barely one week after leaving Ghana, it has emerged that Mr. Ramaphosa has tested positive for Covid-19.

He is currently receiving treatment for mild symptons after testing positive on Sunday, December 12, 2021, the office of the Presidency said in a statement.

He is self-isolation in Cape Town, the statement disclosed.

Mr. Ramaphosa has immediately delegated all responsibilities to Deputy President, David Mabuza for the next week.

The statement added, “President Ramaphosa says his own infection serves as a caution to all people in the country to be vaccinated and remain vigilant against exposure. Vaccination remains the best protection against severe illness and hospitalization.”