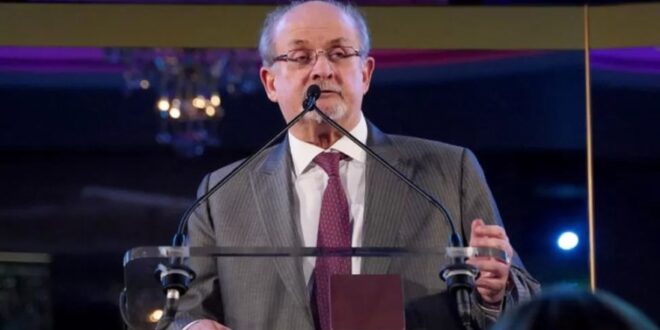 Author Salman Rushdie, who suffered years of Islamist death threats after writing The Satanic Verses, has been stabbed on stage in New York state.

The Booker Prize winner, 75, was speaking at an event at the Chautauqua Institution at the time.

New York State Police said a man ran up onto the stage and attacked Mr Rushdie, who is now undergoing surgery at a local trauma centre.

No motive or charges have yet been confirmed by police.

The interviewer who was also on stage, Henry Reese, suffered a minor head injury and was taken to a local hospital. Mr Reese is the co-founder of a non-profit that provides sanctuary to writers exiled under threat of persecution.

Police told a press conference that staff and audience members had rushed the attacker and took him to the ground, and he was then arrested.

A video posted online shows the moment people dashed onto the stage immediately after the incident, and police said a doctor in the audience gave Mr Rushdie first aid.

Watch: From the scene where Salman Rushdie was attacked on stage

Indian-born novelist Mr Rushdie catapulted to fame with Midnight’s Children in 1981, which went on to sell over one million copies in the UK alone.

But his fourth book, in 1988 – The Satanic Verses – forced him into hiding for nine years.

The surrealist, post-modern novel sparked outrage among some Muslims, who considered its content to be blasphemous, and was banned in some countries.

A year after the book’s release, Iran’s Supreme Leader Ayatollah Khomeini called for Mr Rushdie’s execution. He offered a $3m (£2.5m) reward in a fatwa – a legal decree issued by an Islamic religious leader.

The bounty over Mr Rushdie’s head remains active, and although Iran’s government has distanced itself from Khomeini’s decree, a quasi-official Iranian religious foundation added a further $500,000 to the reward in 2012.

The British-American citizen – who was born to non-practising Muslims and is an atheist himself – has become a vocal advocate for freedom of expression, defending his work on several occasions.

Salman Rushdie has faced death threats for more than 30 years since the publication of The Satanic Verses. Mr Rushdie said the main thrust of his novel was to examine the immigrant experience, but some Muslims were offended by portrayals of the Prophet Muhammed and the questioning of the nature of the revelation of the Quran as the word of God.

The Satanic Verses was banned first in the author’s country of birth, India, and then several other countries before Iran’s Ayatollah Khomeini issued his infamous fatwa.

The fatwa called for the killing of anyone involved in the publication of the book and offered rewards to those who took part in the murders. That fatwa has never formally been rescinded.

Surprised by the widespread nature of the protests, Salman Rushdie apologised to Muslims but went into hiding for much of the next 10 years.

Though the writer had escaped physical harm until now, others associated with the book had not, with its Norwegian publisher having been shot and seriously wounded in the early 90s, and its Japanese translator stabbed to death.

When Mr Rushdie was knighted in 2007 by the Queen, it sparked protests in Iran and Pakistan, where one cabinet minister said the honour “justifies suicide attacks”.

Several literary events attended by Mr Rushdie have been subject to threats and boycotts – but he continues to write. His next novel, Victory City, is due to be published in February 2023.

His appearance at the Chautauqua Institution event, in western New York, was the first in a summertime lecture series hosted by the non-profit organisation.

UK Prime Minister Boris Johnson tweeted: “Appalled that Sir Salman Rushdie has been stabbed while exercising a right we should never cease to defend.”

Writer and graphic novel creator Neil Gaiman said he was “shocked and distressed” by the attack on his friend and fellow writer.

“He’s a good man and a brilliant one and I hope he’s okay,” Gaiman wrote on Twitter.

In a statement, Mr Rushdie’s publishers at Penguin Random House said: “We condemn this violent public assault, and our thoughts are with Salman and his family at this distressing time.”

New York Governor Kathy Hochul vowed to “assist however needed in the investigation” into the stabbing.

“Here’s an individual who has spent decades speaking truth to power. Someone who’s been out there, unafraid, despite the threats that have followed him his entire adult life,” she said.