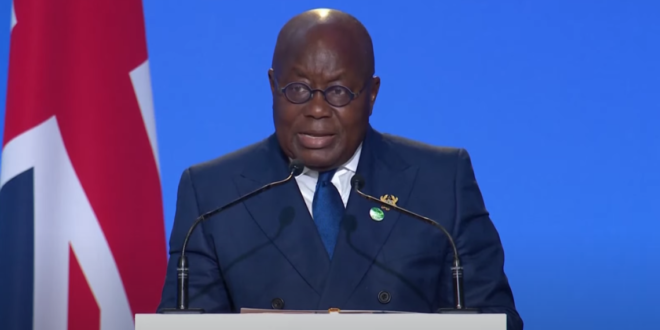 President Nana Addo Dankwa Akufo-Addo has announced that Ghana has officially been removed from the European Union’s list of money laundering and terrorist financing countries.

This was after the country enacted various legislations to criminalize money laundering and fight the crime.

Ghana was removed from the Financial Action Task Force’s list after the global watchdog on money laundering and terrorist financing got satisfied that Ghana had adequately strengthened its regime against the two practices, in line with international requirements.

Speaking at a meeting with the visiting Hungarian President, János Áder at the Jubilee House, Nana Akufo-Addo said Ghana welcomes the news.

“We received a notification from the European Commission through the intermediary of the commissioner for financial services, financial stability and capital markets union, Mairead McGuinness that Ghana after the pursuit of some rigorous reforms has now been formally removed from the grey list of high risk countries in money laundering activities,” he said.

A statement from the Jubilee House in May 2021 said the decision to remove Ghana from the list was arrived at during President Nana Akufo-Addo’s two-day working visit to Brussels, Belgium.

In May 2020, Ghana was cited by the European Commission for anti-money laundering and terrorism financing concerns together with three other African countries including Botswana, Mauritius and Zimbabwe.

They had all been subjected to financial transaction scrutiny.

A report by the Commission said the findings were part of a comprehensive approach to further strengthening the EU’s fight against money laundering and terrorist financing.

Other countries that were listed include Bahamas, Barbados, Jamaica, Nicaragua, Panama, Cambodia, Mongolia and Myanmar.

The listed countries were identified after a systematic assessment of their integrity of the EU financial system by the International Monetary Fund (IMF).

In order for them to be delisted, the affected countries were to show a strong commitment to addressing the menace.

Ghana was added to a list of 23 countries in February 2019 for the same reason.

At the time, the Finance Ministry described as regrettable the decision of the European Commission to add Ghana to its lists of countries defaulting in the anti-money laundering and the financing of terrorism framework.