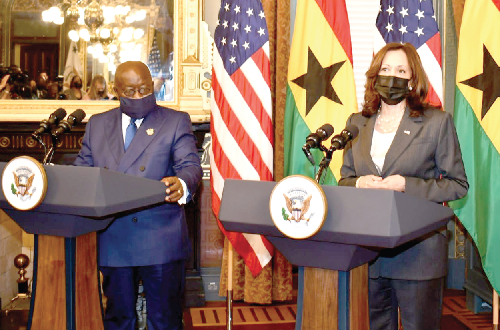 The Vice-President of the United States of America (USA), Ms Kamala Harris, has described Ghana as conducive for doing business in Africa.

She said not only had the Ghanaian government created an enabling environment; it had also built confidence by upholding the rule of law and respect for human rights, ingredients for growth.

Ms Harris, who gave the commendation during a visit by President Nana Addo Dankwa Akufo-Addo to the White House for bilateral talks, added: “We are confident in the Government of Ghana, Mr President.”

The visit, which was aimed at strengthening existing ties of co-operation and friendship between the two countries, formed part of President Akufo-Addo’s engagements in the US, where he is attending the 76th General Assembly of the UN.

Addressing a press conference before the two leaders went into a closed-door meeting, Vice-President Harris said the meeting was also “a reaffirmation of the strength of the relationship between the US and Ghana, and of course we have had deep historical ties or official bilateral relationship since 1957”.

She said the atmosphere created by the government under the leadership of President Akufo-Addo had attracted interest in Ghana, as evidenced by the number of American companies which were ramping up to Ghana to seek investment opportunities.

Ms Harris said as an expression of its shared commitment to Ghana and global health, in line with the fight against the coronavirus disease (COVID-19) pandemic, the US would donate 1.3 million doses of the Pfizer vaccine to Ghana.

That was in addition to some 1.2 million doses of the Moderna vaccine Ghana received from the US on September 4, 2021.

“The US is proud to be a member of COVAX.  We have already donated more than 1.2 million doses of the Moderna vaccine to Ghana.

“I am proud to announce that, shortly, we will be sending an additional 1.3 million doses of the Pfizer vaccine. None of us is immune to the ravages of the pandemic,” she added.

He said the support could be in the form of retooling and building the capacity of the country’s Armed Forces and intelligence agencies to be able to deal with the threats and challenges the jihadists posed in the sub-region.

“Many of those leading the jihadist insurrections in West Africa are people who came from Iraq after they were driven out of that country, so I think if there is any information that can assist us to track down and deal with these people, it would be welcome,” he added.

On Ghana-US relations, President Akufo-Addo expressed the hope that the collaboration would continue to “advance our mutual causes and strengthen the relations between our two countries”.

“We want to develop our nation as a democracy where freedom and respect for human rights and the rule of law are paramount to our governance system,” he said.