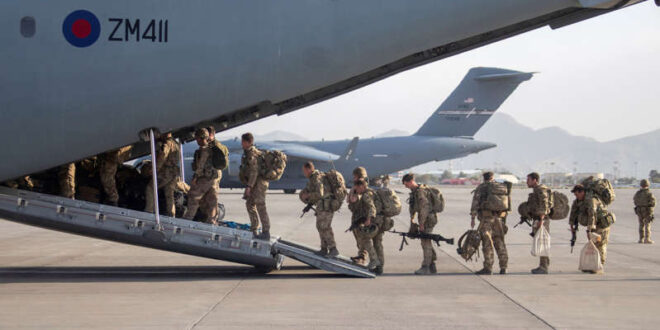 The last evacuation flight left earlier on Saturday. About 14,000 people were airlifted out of Afghanistan by British forces in less than two weeks, the Ministry of Defence has confirmed.

The prime minister, Boris Johnson, said now was a time to reflect on the UK’s mission in Afghanistan.

“Twenty years ago, in the wake of the 9/11 attacks, the first British soldier set foot on Afghan soil aiming to create a brighter future for the country and all its people,” he said.

“The nature of our engagement in Afghanistan may have changed, but our goals for the country have not. We will now use all the diplomatic and humanitarian tools at our disposal to preserve the gains of the last 20 years and give the Afghan people the future they deserve.”

The Labour leader, Sir Keir Starmer, said: “I pay tribute to the brave men and women of our armed forces who have done so much to provide the opportunity of a new life to so many.

“Our diplomatic staff and military personnel should be proud of the heroic work they have done and we owe them a great debt of gratitude. It is now for the government to urgently set out a plan for those left behind.”

The British ambassador to Afghanistan, Sir Laurie Bristow, had earlier said it was “time to close this phase” of the evacuation effort.

In a video posted on Twitter, Bristow – who has remained in Afghanistan processing those who need to leave the country – said: “The team here have been working until the very last moment to evacuate British nationals, Afghans and others at risk.

“Since 13 August, we’ve brought nearly 15,000 people to safety, and about 1,000 military, diplomatic, civilian personnel have worked on Operation Pitting in Kabul; many, many more elsewhere.

“Thursday’s terrorist attack was a reminder of the difficult and dangerous conditions in which Operation Pitting has been done. And sadly I attended here yesterday the ceremony to pay our respects to the 13 US soldiers who died.”

Prompted by the US decision to remove all its forces from the country by 31 August, after 20 years, and hastened by the Taliban’s takeover of Afghanistan, the evacuation was punctuated on Thursday by a bomb and gun attack against people waiting at the airport and US troops, which killed more than 90 people.

While about 10,000 Afghan nationals who had worked with UK forces or other organisations have been removed under the Afghan relocations and assistance policy (Arap) scheme, up to 1,100 eligible people were left behind, according to the defence secretary, Ben Wallace.

The BBC reported that a taxi driver from London, Mohammad Niazi, was killed during gunfire in the aftermath of the blast, while his wife and two of their children were missing. A second British victim was identified as Musa Papal, 60, according to Sky News.

The foreign secretary, Dominic Raab, said on Friday that two British nationals and the child of another British citizen were killed. It was not clear whether this figure included Niazi.