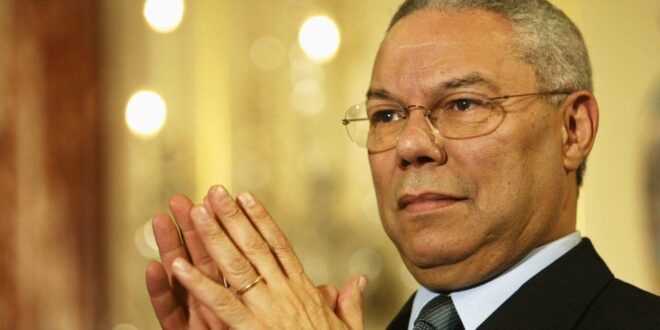 Colin Powell, the first Black US secretary of state whose leadership in several Republican administrations helped shape American foreign policy in the last years of the 20th century and the early years of the 21st, has died from complications from Covid-19, his family said on Facebook. He was 84.

“General Colin L. Powell, former U.S. Secretary of State and Chairman of the Joint Chiefs of Staff, passed away this morning due to complications from Covid 19,” the Powell family wrote on Facebook, noting he was fully vaccinated.

A source familiar with the matter said Powell had multiple myeloma, a cancer of plasma cells that suppresses the body’s immune response. Even if fully vaccinated against Covid-19, those who are immunocompromised are at greater risk from the virus.
“We have lost a remarkable and loving husband, father, grandfather and a great American,” the family said.

Powell was a distinguished and trailblazing professional soldier whose career took him from combat duty in Vietnam to becoming the first Black national security adviser during the end of Ronald Reagan’s presidency and the youngest and first African American chairman of the Joint Chiefs of Staff under President George H.W. Bush.

His national popularity soared in the aftermath of the US-led coalition victory during the Gulf War, and for a time in the mid-90s, he was considered a leading contender to become the first Black President of the United States. But his reputation would be forever stained when, as George W. Bush’s first secretary of state, he pushed faulty intelligence before the United Nations to advocate for the Iraq War, which he would later call a “blot” on his record.

Bush said in a statement Monday that Powell was “a great public servant” who was “such a favorite of Presidents that he earned the Presidential Medal of Freedom — twice. He was highly respected at home and abroad. And most important, Colin was a family man and a friend.”

hough Powell never mounted a White House bid, when he was sworn in as Bush’s secretary of state in 2001, he became the highest-ranking Black public official to date in the country, standing fourth in the presidential line of succession.

“I think it shows to the world what is possible in this country,” Powell said of his history-making nomination during his Senate confirmation hearing. “It shows to the world that: Follow our model, and over a period of time from our beginning, if you believe in the values that espouse, you can see things as miraculous as me sitting before you to receive your approval.”

Later in his public life, Powell would grow disillusioned with the Republican Party’s rightward lurch and would use his political capital to help elect Democrats to the White House, most notably Barack Obama, the first Black president whom Powell endorsed in the final weeks of the 2008 campaign.

The announcement was seen as a significant boost for Obama’s candidacy due to Powell’s widespread popular appeal and stature as one of the most prominent and successful Black Americans in public life.

Powell is survived by his wife, Alma Vivian (Johnson) Powell, whom he married in 1962, as well as three children.

It is not clear if Powell had received a booster dose of the vaccine. Covid-19 vaccines are a highly effective tool in preventing severe disease and death, but no vaccine is 100% effective.

More than 7,000 breakthrough cases of Covid-19 that have resulted in death have been reported to the US Centers for Disease Control and Prevention through October 12. By that time, more than 187 million people in the US were fully vaccinated. That’s one out of every 26,000 fully vaccinated people who has died of Covid-19, or 0.004%.
Of those breakthrough cases resulting in death, 85% were among people age 65 and older and 57% were among men, according to the CDC.

Leaders mourn a ‘trailblazer and role model’
Powell’s death was met with an outpouring of grief from former and current leaders, including President Joe Biden who described Powell a “dear friend” and a dedicated public servant who broke barriers.

“Colin embodied the highest ideals of both warrior and diplomat. He was committed to our nation’s strength and security above all. Having fought in wars, he understood better than anyone that military might alone was not enough to maintain our peace and prosperity. From his front-seat view of history, advising presidents and shaping our nation’s policies, Colin led with his personal commitment to the democratic values that make our country strong. Time and again, he put country before self, before party, before all else — in uniform and out — and it earned him the universal respect of the American people,” Biden said.

Former Vice President Dick Cheney, who served alongside Powell under Bush said he was “deeply saddened to learn that America has lost a leader and statesman. General Powell had a remarkably distinguished career, and I was fortunate to work with him,” Cheney said in a statement, adding that Powell was a “trailblazer and role model.”
Former Secretary of State Madeleine Albright, Powell’s predecessor at the department, remembered him on Monday as “a wise and principled man, a loyal friend, and one of the kindest people I have ever met.”

“Although we grew up in different contexts, we bonded over our family’s immigrant stories, our deep love of America, and our belief in the importance of public service,” she said in a statement.

Condoleezza Rice, who succeeded Powell at State following his retirement in 2005, said on Monday that he “was a trusted colleague and a dear friend through some very challenging times,” adding in her own statement that “much of his legacy will live on in the countless number of young lives he touched.”

And Antony Blinken, the current officeholder, said Monday that Powell “gave the State Department the very best of his leadership, his experience, his patriotism.”
Defense Secretary Lloyd Austin said in remarks on Monday that in Powell he “lost a tremendous personal friend and mentor.”

“He always made time for me and I could always go to him with tough issues. He always had great counsel. We will certainly miss him,” said Austin, who himself made history earlier this year as the first Black Defense secretary.

Professional soldier
Colin Luther Powell was born April 5, 1937, in Harlem, New York, to Jamaican immigrants. After growing up in the South Bronx, Powell attended school at the City College of New York, where he participated in ROTC, leading the precision drill team and attaining the top rank offered by the corps, cadet colonel.

“I liked the structure and the discipline of the military,” Powell said, according to a CNN profile of him in the early 2000s. “I felt somewhat distinctive wearing a uniform. I hadn’t been distinctive in much else.”

He entered the US Army after graduating in 1958, and later served two tours in South Vietnam during the 1960s, where he was wounded twice, including during a helicopter crash in which he rescued two soldiers. He stayed in the Army after returning home, attending the National War College and rising in leadership. He was promoted to brigadier general in 1979, appointed as Reagan’s final national security adviser in 1987 and was tapped by the elder Bush in 1989 to head the Joint Chiefs of Staff.

Powell’s tenure in the elder Bush’s administration was marked by his involvement in some of the most notable American military actions of the late 20th century, including the 1989 Panama operation, the 1991 Gulf War and the US humanitarian intervention in Somalia, though he retired from the Army days before the disastrous Battle of Mogadishu.

Although Powell was initially reluctant to commit US troops when Iraq invaded Kuwait in 1990, he became one of the administration’s most trusted spokesmen when the assault on Saddam Hussein’s army finally came.

Following the assault, Powell became something of a national hero, enjoying a 71% favorability rating in the first few year years after the war. His efforts during the war also earned him two prominent awards: a Congressional Gold Medal in March 1991 “in recognition of his exemplary performance in planning and coordinating” the US response to Iraq’s invasion, and a Presidential Medal of Freedom.

As the elder Bush presented Powell with the award at a White House ceremony in 1991, he said the general’s “deep compassion for every one of the thousands of men and women under (his) command will always be remembered.”

During Powell’s time in the military, which lasted until 1993, he also received a number of other notable awards, including the Bronze Star and two Purple Hearts. He received his fourth star in 1989, becoming the second African American to rise to that rank.