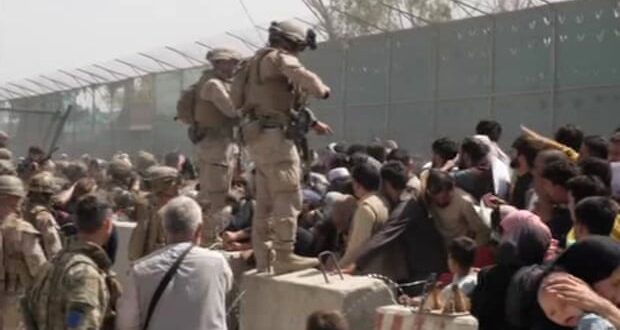 The US has warned its citizens to avoid Kabul airport amid continued chaos outside the terminal.

A security alert issued on Saturday told US citizens to stay away due to “potential security threats outside the gates”.

Only those individually told to make the journey by a US government representative should do so, it said.

The advice comes as thousands try to escape from Afghanistan via the airport following the Taliban takeover.

The militant group swept across the country and captured the capital, Kabul, on 15 August. Since then, tens of thousands of Afghans – as well as foreign nationals – have headed to the airport in a bid to flee the country.

Crowds have been gathering daily, hoping to be allowed on to a flight. Those who work with the US and its allies, as well as people who have campaigned on issues like human rights, fear they may face reprisals at the hands of the Taliban if they are unable to leave.

What exactly has been happening at the airport gates on Saturday remains unclear.

However, Sky News’ chief correspondent Stuart Ramsay said that people at the front of the crowd of thousands were being “crushed to death”, with British soldiers pulling those in danger from the throng.

He has described it as “the worst day by far”, and said they believed people had died at the scene.

In a briefing on Saturday, the US Department of Defense said 17,000 people have been flown out of the airport, including some 2,500 US citizens.

An official said a “small number” of Americans and Afghans the US wanted to evacuate had faced harassment. In some cases, they had been beaten on their way to the airport.

A spokesperson for the US State Department later told the BBC they issued the guidance to avoid large crowds outside the airport gates.

It is also because they now have the capacity to communicate with US citizens “on a personalised basis”, to give them “tailored instructions” on how to travel, the spokesperson said.

Other countries have also warned about the situation on the ground.

Germany’s government issued a statement saying the airport remains “extremely dangerous and access to the airport is often not possible”, while the Swiss foreign ministry announced the security situation had “deteriorated significantly in the last few hours” and postponed a chartered evacuation flight from Kabul.

US forces are currently controlling the international airport. They are helping to evacuate their own citizens and those of other countries, including Afghans who worked with Western forces and fear for their safety under the Taliban.

But the US has set a withdrawal date of 31 August for their troops, and it is unclear what will happen after this date.

Nato Secretary General Jens Stoltenberg says several countries from the alliance have proposed that Kabul airport remain open for evacuations beyond 31 August to allow them to get more people out.

The BBC understands the UK is one of these countries, and is requesting an extension of a few days.

Some fear they will not be able to evacuate all their citizens, or all the Afghans they believe to be in danger, as they struggle to process all those queueing at the airport and to step up the number of evacuation flights.

Josep Borrell, the EU’s foreign policy chief, told AFP news agency that it was “mathematically impossible” for the US to evacuate all Afghans with travel permits by 31 August.

The EU had “complained” to the US that their security was too strict and was stopping Afghans who had worked for Europeans to enter the airport, he said.

On Friday, US President Joe Biden vowed that “any American who wants to come home, we will get you home”. But he admitted the evacuation was “not without risk of loss”, declaring it “one of the largest, most difficult airlifts in history”.

The Taliban, meanwhile, are trying to consolidate their control over Afghanistan.

Mullah Abdul Ghani Baradar, the group’s co-founder, has now arrived in Kabul and is set to join talks on establishing a new government.

He is the most senior Taliban leader now in the country and is likely to become a leading figure in any Taliban-led government.

A Taliban official told Reuters news agency that they hoped to have a model for governing Afghanistan within the next few weeks.

It will not be a democracy like in the West but it will “protect everyone’s rights”, he told the agency.

Mr Baradar signed an agreement with the US in 2020, in which the US agreed to withdraw all its forces from Afghanistan.