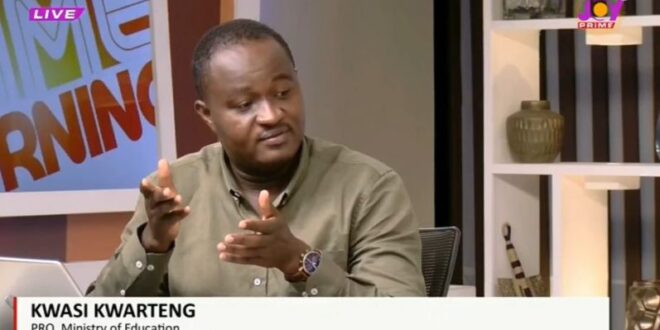 Spokesperson for the Ministry of Education, Mr. Kwesi Kwarteng has revealed that, government is working to set a date for the re-opening of basic schools, across the country.

Speaking in an interview on NewsNight on Monday, Mr. Kwarteng refuted claims that the absence of an academic calendar can jeopardise the studies of pupils in basic schools across the country.

According to him, the Ministry of Education is working to resolve the current challenge.

“And so clearly, it’s an undeniable fact that the whole COVID regime certainly distorted our academic calendar. But of course, what the Minister for Education has done is to now set the clarity, so that the inconsistencies and of course the discrepancies when it comes to our academic calendar, that we have been witnessing, will be a thing of the past.

And so what the Minister for Education, the honourable Dr. Yaw Osei Adutwum, has done is to set up a ministerial committee on school calendar. The committee had met, of course, under the leadership of the Deputy Minister, Rev. Ntim Fordjour. Just last Thursday, they finalised the draft document of their work.

And what it means is that, we’re going to have clarity and consistency in the academic calendar of our students. Not only for the 2021/2022 academic calendar, but even beyond. And so you’ll be having 2022/2023, 2023/2024, so that we set that clarity. So those problems with inconsistencies in re-opening dates, will be a thing of the past”, Mr. Kwarteng explained.

Responding to when the committee will be through with its mandate, Mr. Kwarteng indicated that, “We’re very hopeful that within this week, the final report will come out so that we’ll have a clarity on the academic calendar, i.e. reopening and closing for all schools in the pre-tertiary category”, Mr. Kwarteng stated.

The interview with the spokesperson of the Ministry of Education was prompted by an assertion by the Deputy Ranking Member on Parliament’s Education Committee, Dr. Clement Apaak, that two weeks into the new year, there’s no clarity on when pupils in basic schools will return to the classroom.

According to the Builsa South MP, children in private schools have already reported to school, thus they would have a unfair advantage over their colleagues in public schools.

He therefore warned that if the situation is not resolved immediately, he will ensure that the Minority hauls the Education Minister before Parliament.

“If we’re going to have a strong and robust educational system, we have to pay a lot of attention to basic education. As we speak now, heads and teachers of publi basic schools in Ghana do not know when public basic schools are going to re-open.

The original communication that many had, particularly those who were seeking transfer to new schools was that, they should report before the 4th of this month, to suggest that the schools should have re-opened on the 4th, but that has not happened.

As we speak today, private basic schools across the country have reopened and yet we have no idea on exactly when public basic schools will reopen”, Dr. Apaak stated.

But reacting to these issues, Mr. Kwesi Kwarteng said, government has taken note of these developments, and that plans are afoot to address the impending challenges.