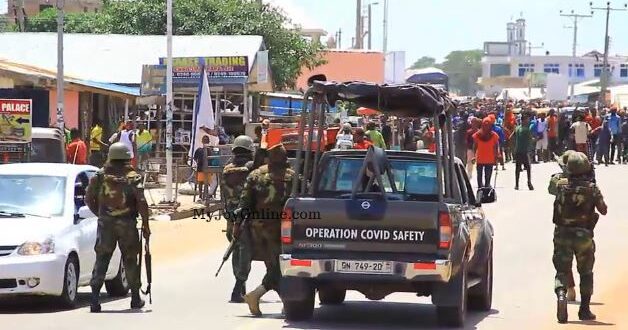 President Akufo-Addo has called on the Minister for the Interior, Ambrose Dery, to conduct a public inquiry into the circumstances that led to the death of two persons in Ejura on Tuesday, June 29.

A press statement signed by the Ag. Director of Communications at the Presidency, Eugene Arhin, indicated that the President has given the Minister, ten days to provide a detailed report of the inquiry.

“The Interior Minister is to provide a detailed report from the inquiry, with recommendations for appropriate action to be taken by July 9, 2021”, parts of the statement read.

Things turned turbulent as a joint Police and Military team accosted the agitated youth on the streets while demanding justice for late social activist Kaaka Mohammed.

The statement revealed that the President is deeply saddened by the death of Ibrahim Mohammed, alias ‘Kaaka’ and the other two persons who died, namely; Abdul Nasir Yussif and Murtala Mohammed.

“He extends sincere condolences to the families of the deceased, and wishes the injured a speedy recovery,” parts of the statement reads.

On Monday, it was reported that a 40-year-old social activist, who was attacked by an angry mob at Ejura Saturday dawn, had died.

The deceased, Ibrahim Mohammed, was attacked by two assailants, who have allegedly been arrested by the Police. He was repeatedly struck on the head with objects until he lost consciousness.

This news left many Ghanaians and some youth in Ejura in shock. While others took their anger to their online platforms, the youth in the area took to the streets demanding justice for the murdered social activist.

Since the death of the 40-year-old Ibrahim Mohammed, aka Kaaka, over the weekend, the youth say they are willing to sacrifice their lives to get justice for him.

The youth stormed the police station on Tuesday morning to inquire about the extent of investigations regarding the murder of their colleague and #FixTheCountry activist, stressing that they want the Police to leave no stone unturned in bringing the perpetrators to book.

Pressing home their demand for justice, the youth hit the streets but were met by Military and Police personnel.

However, things turned turbulent as the joint Police and Military team accosted the agitated youth on the streets where the two were shot in the process.

Later in the day, the Ghana Police Service released a statement saying that its Ashanti Regional Police Command had commenced investigation to establish the circumstances surrounding the violent clashes between the youth and security personnel in Ejura Sekyedumase on Tuesday.

The Service said its preliminary investigation shows that following the burial of activist Ibrahim Mohammed aka Kaaka at Mempeasem cemetery at Ejura, the youth blocked the main Ejura Atebubu road impeding traffic.

“The Police moved in with Military reinforcement to quell the situation but the irate youth charged on the security officers with all manner of implements including firearms, clubs, machetes and stones.

“The security officials fired shots to disperse the angry mob who failed to retreat but rather massed up at all corners. The death and injuries were recorded in the process.”

However, Member of Parliament for Ejura Sekyeredumase, Braimah Mohammed has described as false, the claims by the police that the youth of the area attacked the security agencies during their protest to demand justice for dead activist, Kaaka Mohammed.

According to him, the Police statement is an afterthought and an attempt by the security agencies to cover up the fact that they acted unprofessionally when they opened fire on the youth leading to the death of the two and four others sustaining injuries.