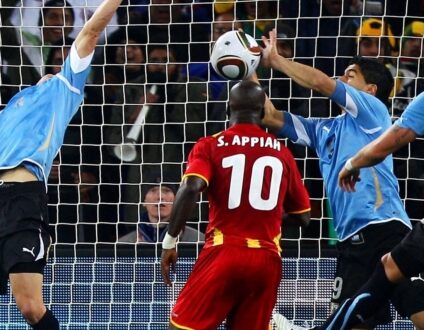 2022 World Cup: Ghanaians on Twitter call for revenge against Uruguay

Ghana has been drawn with Portugal, Uruguay and South Korea in Group H for the 2022 World Cup to be played in Qatar later this year.

This appears to be an interesting group for many Ghanaians due to what happened in the 2010 South Africa World Cup when Ghana played against Uruguay.

Uruguay’s striker, Luis Suarez became the villain in 2010 when he denied Ghana a qualification to the semi-finals in the dying minutes of the game by deliberately, through a handball, preventing Ghana’s Asamoah Gyan from scoring with a header.

Twelve years on, Ghanaians on Twitter are already calling for revenge against Uruguay for the sins of Suarez as the country draws again in Group H with Uruguay.