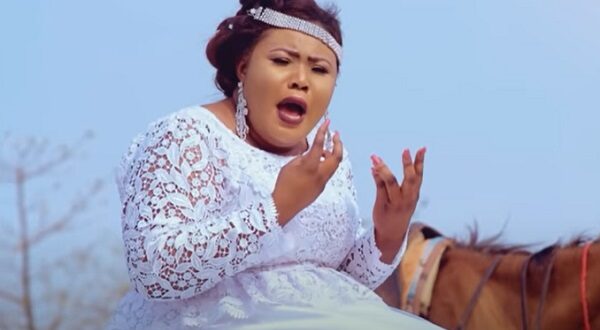 Ghanaian gospel musician Jacklin Sarfo Gyamfua aka Ohemaa Jacky said to have absconded from Ghana while on trial for defrauding by false pretenses has been arrested by the International Police (INTERPOL) in Cotonou, Benin.

She was arrested by INTERPOL, Cotonou when INTERPOL Accra sent a signal for her arrest.

She was found to be in possession of a suspected fake Italian passport, the Ghana News Agency (GNA) reports.

Ohemaa Jacky is said to have been arrested together with her husband, Emmanuel Peprah on February 16, 2022, whiles attempting to travel to London via Paris from Cotonou.

She was grabbed for possessing a suspected fake Italian passport together with her husband.

The two were put before a court in Cotonou where they were remanded, the GNA reports.

Ohemaa Jacky is already standing trial in Ghana for allegedly defrauding a trader of GH¢150,000 under the pretext of securing for her an Italian passport and a resident identity card.

According to the Prosecution, the “Hakuna Matata” singer who additionally doubles as a blogger, also allegedly forged two Italian passports for the trader and her infant daughter.

Charged with defrauding by false pretenses, the musician pleaded not guilty, and she was granted bail in the sum of GH¢200,000.

Soon after she was granted bail, she refused to attend court, putting pressure on those that stood sureties for her as they were hurled before the court to produce the singer.

The court presided over by Mrs Evelyn Asamoah had issued a bench warrant for the arrest of the musician for failing to appear before her.

The prosecution said security officers had tried to trace her in her home in Accra, but to no avail, until INTERPOL was contacted and the accused was nabbed in Cotonou.