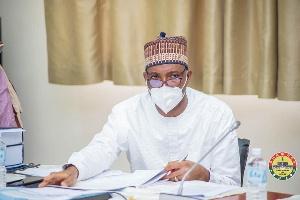 We will shut you down – Muntaka warns Embassies refusing MPs visas

Minority Chief Whip, Muntaka Mubarak has called the bluff of embassies that are using visa bans to threaten Members of Parliament championing the anti-LGBTQ+ bill before Parliament.

The MP for Asawase constituency has said that Ghanaian lawmakers will not be intimidated by attempts by the embassies to victimize them.

Muntaka revealed that some MPs are being denied visas due to their advocacy for the bill. He cautioned the embassies that MPs will be forced to demonstrate against them if they maintain their position of denying them visas.
He said that all avenues including shutting down the embassies will be employed if the situation does not change.
“If we find any embassy that uses this [the passing of the bill] to deny MPs visas, we’ll organise a demonstration to close down that embassy,” he said.

Muntaka’s revelation has been corroborated by Sam Nartey George who has called out the US Ambassador to Ghana for being behind the practice.

Sam George said on Metro TV that some Ghanaian MPs are being threatened with visa denials over their support for the bill. “As for the threats they’ve been coming from far and near. In fact one of the ambassadors, a woman placed a phone call to the Speaker of Parliament and at least one signatory to the bill asking him to withdraw from it.
“That signatory to the bill is my senior in parliament who applied for a visa in that embassy and was refused. He’s had five years visas three times from that country but they refused him after they called him to resign.
“It shouldn’t come as a shock to anybody because the Americans use visas as cheap blackmail. But it is not going to cow any of us. Some members of the bill have had visa applications pending at the American Embassy.

“Because of the Covid-19 they are not giving general visas but there is a special dispensation for students – politicians and MPs fall within that category. Parliament has sent in a number of applications requesting dates for the submission of forms, what they’ve done is to decline to give a date,”10/15/2021