Breaking News
Home / DUAMENEFA NEWS / WE HAVE PAID GHC 4,500.00 TO THE PRIESTESS OF NOGOKPO SHRINE TO SILENCE FAFAA FM AND TERMINATE THE LIFE OF THE CEO 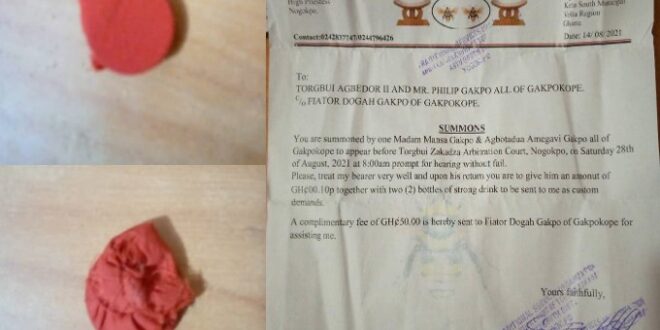 Summons from shrine with threat attached

WE HAVE PAID GHC 4,500.00 TO THE PRIESTESS OF NOGOKPO SHRINE TO SILENCE FAFAA FM AND TERMINATE THE LIFE OF THE CEO

The undercover investigation team of Duamenefa Foundation of Fafaa 100.3 FM, Dzodze hijacked the voice recordings of a secret meeting between Horsede Kudalor, a voodoo practitioner and his family members of Etrorkorpe in the Akatsi North District of the Volta Region.

In the said secret meeting voice recordings, Mr. Horsede Kudalor, in interactions with members of his family claimed he visited Nogokpo in company of Mr. Amegavi Gakpo his friend, where they have paid Ghc 4,500.00 to Mama Ladzesi, the chief priestess to truncate an ongoing investigation on Fafaa FM, silence the radio, and terminate the life of the CEO at any moment.

It is in the public domain for the past eighteen months, since March, 2020 till date, that the Duamenefa Foundation of Fafaa FM, under the leadership of its Executive President and CEO, Emmanuel Ketaman Evortepe, has been investigating allegations of a mysterious wizardry pot which was allegedly inherited by Amegavi and Masaga Gakpo from their late father.

Members of the Gakpokorpe community alleged that their family members are suffering from incessant deaths under mysterious circumstances and other related spiritual attacks for the past 26 years. While they suffered, those who are using the mystery pot prosper financially, hence two factions of the family officially petitioned the Duamenefa Foundation of Fafaa FM to conduct an urgent investigation and intervention to save lives.

The timely intervention of the Duamenefa Foundation of Fafaa FM through undercover investigations and collaboration with relevant stakeholders has yielded positive results which compelled Amegavi Gakpo, the friend of Horsede Kudalor to plead for seven days grace period to revert to the chiefs.

The latest allegations of the attempt by Mr. Horsede and his friend Amegavi to consult Nogokpo Shrine through allegations of bribery to halt further investigations and terminate the life of the investigators and the radio station was again exposed.

Mr. Horsede assured his family members that henceforth the Trorkorpe community would be reckon by other communities as very powerful people.

He further claimed that his friend Amegavi has a lot of money from the operations of the mysterious wizardry pot and owned three tractors, hence the need to go to Nogokpo to pay the ransom to manipulate the voodoo powers against Fafaa FM and their Chief Executive Officer.

When the Nogokpo shrine was contacted to react to the aforementioned allegations, their spokesperson, Mr. Kwaku Adukpo, however, in an interview on Fafaa FM denied the allegations and claimed they were paid the sum of Ghc 950.00 as consultation and summons fees, but not Ghc 4,500.00 as alleged.

According to Mr. Adukpo, even though the Divisional Chief of Akatsi- Live, Togbi Dzadzi II  and his retinue of chiefs held various traditional arbitrations over the controversial alleged mysterious wizardry pot with live broadcasts on Fafaa FM and other social media platforms, and whereas Amegavi Gakpo pleaded for seven days grace to revert to the chiefs, Mr. Adukpo claimed the Nogokpo shrine is not privy to the story and Amegavi and Horsede could not tell them either, hence they have accepted only Ghc 950.00 as summons fee and did issue same to Phillip Gakpo and Togbi Agbedor to appear before their shrine without recourse to Togbi Dzadzi II and his chiefs as tradition demands.

The Duamenefa Foundation of Fafaa FM has reported the matter to the Akatsi Divisional Police Command for further investigation and possible prosecution in the court of competent jurisdiction.

Watch out for further development………..