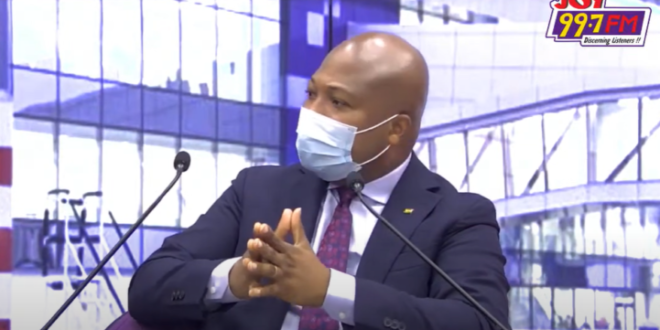 Member of Parliament for North Tongu, Samuel Okudzeto Ablakwa has condemned the comment made by President Akufo-Addo over the abandoned E-block project at Aflao in the Volta Region.

President Akufo-Addo during an interview on Accra-based Peace FM on Thursday entreated Paramount Chief of the Aflao Traditional Area to “complete” the abandoned E-block community day senior high school in the area himself if he is concerned about the delay.

The President’s submission, according to Mr Ablakwa is not appropriate.

“As President, you don’t use this intemperate language when a legitimate call has been made by a Chief who is passionate about the development of his people, particularly their education,” the MP said on Thursday evening.

He noted on Accra-based TV3 that the request made by Torgbui Adzonu-Gaga Amenya Fiti V to have the E-block community day senior high school completed is not distinct from calls by various chiefs in the country for abandoned projects in their jurisdictions to be completed and operationalised.

“This is the most condescending, disrespectful, disdainful and the most contemptuous retort that any President of the Republic has directed at a Paramount Chief. What Togbe Fiti V said is not different from what chiefs all over the country have been saying – that projects in their communities which have been abandoned, should be attended to.

“We know that there has been this culture of abandoned projects. We have heard Chiefs, some of their subjects have even led demonstrations. There was one in Abetifi a few weeks ago. We heard the Tepa Chief complain about the abandoned hospitals. We have heard the Kumawu Chief complain about abandoned hospitals. Chiefs all over this country have complained about this culture retarding progress.”

After the controversial statement, President Akufo-Addo assured the traditional leader his government is resolved to continue projects started by his predecessor.

He stressed that plans are being executed to complete the projects and put them to use.

“For some of the projects definitely we will ready ourselves and complete them. But, as much as possible, I have given you these examples for you to see that despite the propaganda [we are working on them],” he stated.

But Mr Ablakwa is of the view that government lacks the commitment to complete the E-block projects that takes about 18 months to be completed. This he said is because government prioritizes its projects and makes the necessary allocations to fund them.

In view of this, the North Tongu legislator urged the President to retract his comment and render an unqualified apology, adding that “We do not pay our taxes to Togbe Fiti V. All their taxes go to the Central government.”

For Mr Okudzeto Ablakwa, a retraction by the President is imperative as it would solidify initiatives for national unity. He opined that the President should be spearheading such calls and not the other way round.

“We want to unite. The President must be leading that effort. The President should not be at the forefront of discriminating or dividing our ranks and making some chiefs feel that they are not important, making their people feel they are not a part of the Republic,” he stated.