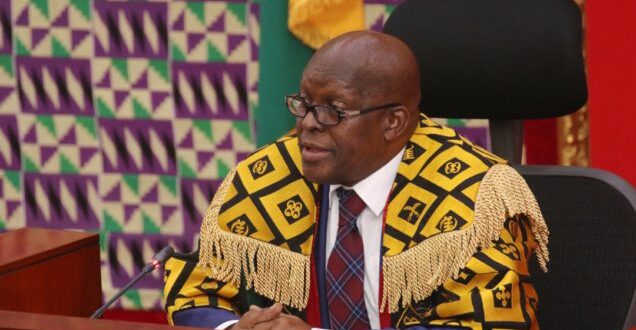 Speaker of Parliament Alban Bagbin has questioned, First Deputy Speaker, Joseph Osei-Owusu’s decision to nullify the rejection of the 2022 Budget by the Minority when he (Alban Bagbin) presided over the House.

According to Mr Bagbin, he did not act beyond his powers when he put the question on the 2022 Budget Statement and Economic Policy of Government to members of the House. Thus, the decision was strange to him.

Addressing Parliament on his return from medical leave, Mr. Bagbin said, “the House was duly constituted for its work for the purposes of business and voting in accordance with Articles 102 and 104 respectively and the public record of the Votes and Proceedings of the House on the 26th of November lends credence to this position.”

Mr. Bagbin stated that he does not believe that overturning the earlier rejection of the budget was a decision the First Deputy Speaker should have taken.

“As to whether a Vice President can preside over a cabinet which had early on taken a decision on a subject matter presided over by the President, and without consulting the President, get the Cabinet to overturn the decision earlier taken, is for your kind debate. But who am I to say, my Deputy, First Deputy Speaker, the Hon. Member for Bekwai Constituency, Hon. Joseph Osei-Owusu, Joe Wise, might have indulged in an act of misconduct tantamount to insubordination.

It would be recalled that Parliament approved the 2022 Budget Statement and Economic Policy of government presented by Minister for Finance, Ken Ofori-Atta, despite the rejection of same on November 30.

The budget was approved in the absence of MPs from the Minority, who declined to participate in the business of the day.

The sitting was delayed by hours of meetings between the Majority and Minority leadership aimed at exploring how to cure what has been termed by the Majority as unconstitutionality by Speaker Alban Bagbin.

The Majority side accused Mr. Bagbin of acting in breach of the 1992 Constitution after he said that 137 MPs had taken a decision to reject the budget.

The Majority claimed that their walkout on November 30, during the discussion of the budget, made the decision of the House invalid.

However, Mr. Bagbin on Thursday disagreed, stating that the staging of walkouts by members of Parliament do not invalidate ongoing parliamentary proceedings.

According to him, walkouts are legitimate avenues by which members of Parliament can express their grievances, adding that, the practice is part of parliamentary procedures.

“I can refer to so many instances where walkouts and boycotts have never succeeded in delaying or preventing the continuation of the business of the house. On August 22nd 2003, the Minority staged a boycott of the house in protest against the National Health Insurance Authority which was under consideration. And the Minority was against one provision. I led that walk out,” he cited.